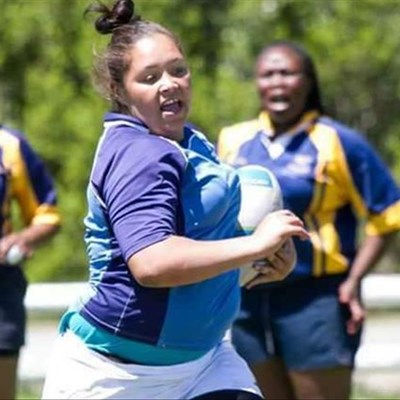 Monique Smith on attack during a Titans club game.

What made this moment even more special is that three players from Knysna's Titans women's rugby club – captain Marlene Adams, Faith Gosling and Monique Smith – were part of the team that beat the Golden Lions from Gauteng.

The SWD EaGirls qualified for the finals on 2 September when they beat Boland at Loerie Park sports field in Knysna.

Adams, also a vice captain for the EaGirls, dominated the line-outs according to Titans coach Aschin Klein, succeeding in taking all of the opposition's ball possession. "With ball in hand and some powerful runs she proved to be a huge threat to the Lions' defence line," he said.

Gosling, who represented Titans Women's Rugby Academy last year as part of the Saru high-performance squad, also proved why she is regarded as one of South Africa's deadliest finishers according to Klein, scoring a sensational try to help her team lift the cup on 16 September.

Smith, a former SWD U18 captain, came onto the field as a replacement tight-head prop, Klein said, and immediately showed why she is regarded as one of the strongest tight-head props in the country by "destroying her opposing prop in the scrums to follow".

The EaGirls scored two tries to the one of the Lions and ended the game with a 23-8 victory. The SWD EaGirls team with their much-deserved trophy after beating Gauteng's Golden Lions in East London on 16 September.