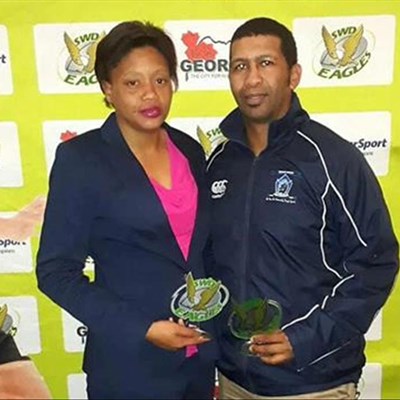 KNYSNA NEWS - The SWD Rugby Union held their annual Rugby Awards gala event at the Wilderness Hotel recently, when various players in the region were honoured for outstanding performances during the 2017 rugby season.

Marlene Adams, a high-performance athlete and captain of the Titans Women's Rugby Academy, received the award as the best female forward rugby player of the year in SWD, after she helped the provincial team to secure the 2017 SA Rugby B-division title earlier this season.

Adams has been playing rugby for the past 10 years for the Titans and has represented SWD in both the 15s and 7s codes.

She also played for EP Queens during the 2014 rugby season.

According to Titans director Aschin Klein, Adams is rated as one of the best locks in Africa and should be close to a call-up from the Springbok training squad.

Adams became the go-to player this year for the provincial SWD EaGirls team, said Klein, and was also awarded the vice-captaincy during the 2017 season for the EaGirls.

"We are very proud of Marlene's achievement. This does not come as a surprise as she has been performing very well on a constant basis.

"Marlene has been working hard behind the scenes, coming from a 12-hour shift at work and still finding time to do a 90-minute gym session and/or a field session.

"I firmly believe Adams will be a huge asset for the Springboks – like Mathrin Simmers, who came from our structures."