RUGBY NEWS - Inspirational South Africa captain Siya Kolisi has warned Japan that the Springboks will be looking for retribution when the teams clash in a World Cup warm-up in Kumagaya on Friday.

The only change to a South Africa side who drew 16-16 with the All Blacks in Wellington six weeks ago after recovering from injury, Kolisi admitted Thursday that the memory of their stunning upset by Japan at the 2015 World Cup was still very raw.

"We don't want to take emotion out if it," said Kolisi, reminded of that 34-32 humiliation on the English south coast.

"What happened is in the past, but obviously we want to rectify that. There's still a lot of us that played in that game - I think seven or eight, who still have that memory.

"It was tough to take," he added. "It did make an impact on us losing that game. But it also made us stronger as a team."

Twice World Cup winners, South Africa face treble-chasing New Zealand in a blockbuster Pool B opener in Yokohama on September 21, a day after hosts Japan open the tournament against Russia in Tokyo.

But Kolisi insisted the Springboks were not looking past Japan, who have become a regular fixture in rugby's top 10 since winning three games under Eddie Jones at the last World Cup.

"They've been building from that and gone on to bigger things. They can turn up the heat at any time and we will have to be on our toes. We're definitely not looking past this game at New Zealand." 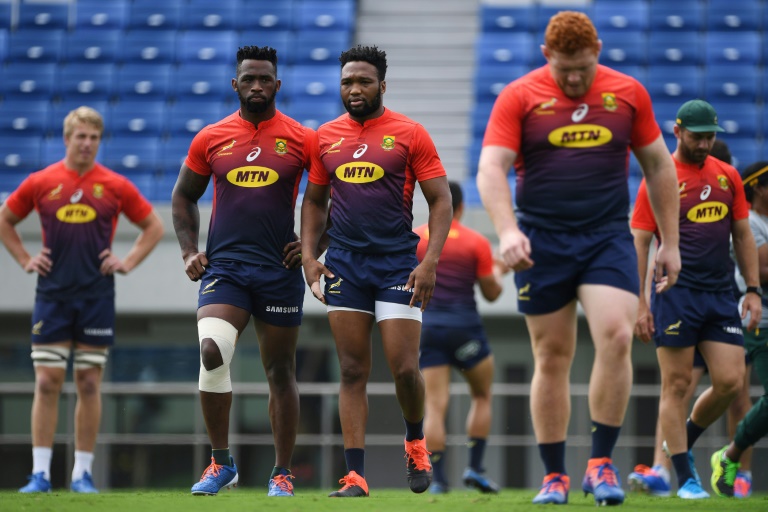 After limbering up by winning the Pacific Nations Cup, Japan coach Jamie Joseph has set the Brave Blossoms a target of reaching the World Cup quarter-finals for the first time, where they could run into the Springboks again.

"I think they have a strong chance of making the knockout stage," said Kolisi, who praised the leadership qualities of opposite number Michael Leitch.

"The World Cup is all about who wants it most on the day."

After becoming South Africa's first black captain last year, Kolisi is poised to mark another milestone by leading his country into the World Cup.

"I'm really grateful to be the Springboks captain," said the 28-year-old, who returned to the line-up in last month's 24-18 victory over Argentina in a World Cup tune-up.

"It's something I would never have dreamed of in my wildest dreams. It really makes me happy to know where I came from. We all have different backgrounds in our team, but anyone from any walk of life can make it."

South Africa coach Rassie Erasmus has named a full-strength team to face the home side in Kumagaya, north of Tokyo, but Japan's attack coach Tony Brown predicted that lightning could strike again.

"We're not going out there to contain the score tomorrow," said the New Zealander.

"We're going out to play our game and put them under pressure. If we get everything right, who knows, we could get a repeat of four years ago."