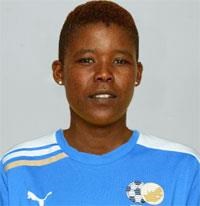 Portia Modise, a nomination for Sport Star of the Year
NATIONAL NEWS - Springbok No 8 Duane Vermeulen and the Springbok Sevens team were on Wednesday named among the nominees for the annual SA Sports Awards.

The Blitzbokke, who won the Sevens World Series tournaments in Port Elizabeth and Las Vegas last season, would slug it out for Team of the Year against Lawn Bowls and the SA Under-19 cricket team.

Winners of the various categories would be announced on November 30.