NATIONAL NEWS - Cyril Ramaphosa vowed a "new era" Saturday after he was sworn in as president of South Africa at a colourful ceremony in the capital, as he looks to revitalise his push revive the economy and fight corruption.

Foreign heads of state from more than 40 countries were among 36,000 people who witnessed the event replete with pomp, military honours and an airforce flyover at a rugby stadium in Pretoria.

Ramaphosa, who became president last year through internal politics in his African National Congress (ANC) party and won a popular mandate in elections on May 8, faces an uphill battle to drive through reforms in a country suffering from chronic jobless rates, inequality, crime and endemic corruption.

"A new era has dawned in our country. A brighter day is rising upon South Africa," said Ramaphosa, promising that the nation was beginning "a new era of hope and renewal".

"This is a defining moment for a young nation like ours. It is a time for us to make the future that we yearn for," added the 66-year-old. 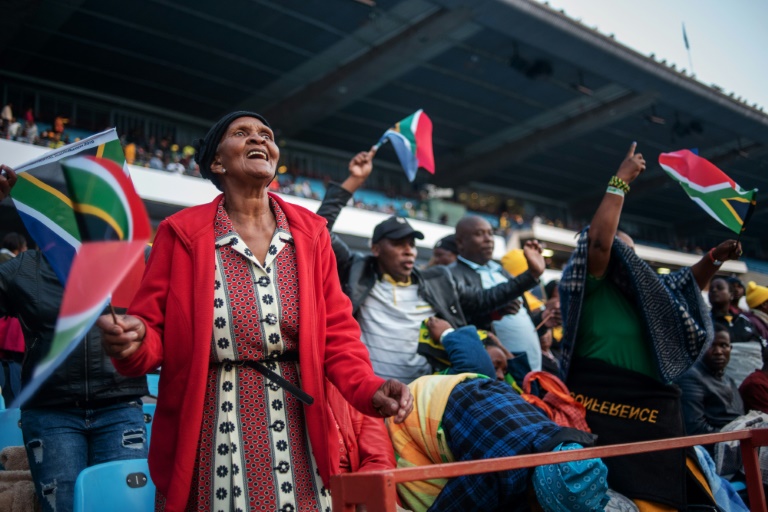 Thousands attended the ceremony in Pretoria

The former trade unionist played a prominent part in the struggle to end white-minority rule - at one point seen as a protege of Nelson Mandela - before becoming a successful businessman and served as vice president to former president Jacob Zuma.

Ramaphosa vowed to root out corruption as he took power last year when the ANC forced scandal-plagued Zuma to resign after nine years in office.

On Saturday he pledged "to build the South Africa that we all want and deserve.

"Let us forge a compact for an efficient, capable and ethical state, a state that is free from corruption."

Ramaphosa faces a herculean task to tackle the country's many problems - from a sickly economy, in which more than a quarter of the workforce is jobless, to land ownership that remains overwhelmingly in the hands of whites.

Many solutions will require him to inch his way along a high wire, balancing leftwing calls for radical change with investors' demands for caution.

Corruption scandals and the country's economic struggles have also dented the support for the ANC.

The party won 57.5 percent of the vote on May 8, its weakest result since apartheid was overturned 25 years ago.

"Today is a historic day in South Africa, the people of this country... have spoken, now the job that we have to make sure we do is build the reforms.

"I will work with the president when he supports the people of this country but when he puts the ANC first I will not be there," Maimane told reporters.

Ramaphosa's first test will be choosing a cabinet - a task beset by rival factions within the ANC.

He is expected to name his new team within days, but the choice of vice president hangs in the balance after deputy David Mabuza said Wednesday he would defer taking his seat in parliament.

An ANC integrity commission report has alleged that Mabuza - the party's No. 2 - "prejudiced the integrity of the ANC and brought the organisation into disrepute".

Maimane called for a smaller cabinet and "not to have criminals in it".

Breaking with tradition Ramaphosa's swearing-in ceremony was moved from the amphitheatre of the Union Buildings - the seat of government, where Mandela was inaugurated as the country's first black president in 1994.

All other leaders after Mandela have taken their oaths at the Union Buildings, whose grounds can accommodate only up to 4,500 people.

But this year the event was moved to the 52,000-seater Loftus Versfeld stadium to allow more people to attend.

All of the country's living former presidents were at the ceremony except for Zuma, who on Friday attended a court hearing on corruption charges in the southeastern city of Pietermaritzburg.

He told supporters afterwards he was too busy to go to Pretoria for Ramaphosa's inauguration.

"There is no time. I am fighting to stay out of jail," Zuma said.

More than 2,500 police were deployed for security, while a battalion of soldiers performed ceremonial parades inside the stadium. The airforce put a spectacular aerobatics display overhead. 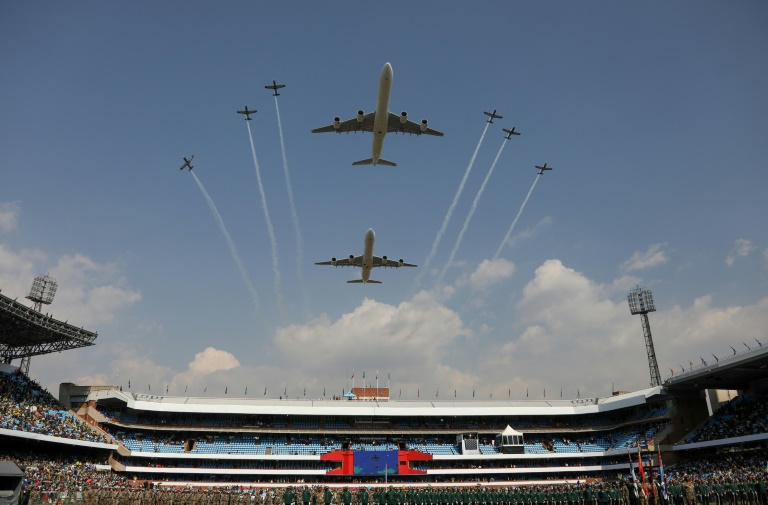