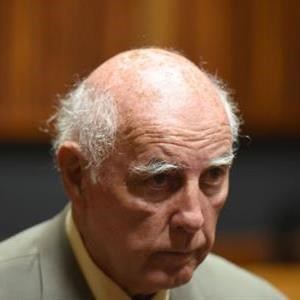 Bob Hewitt. Photo: The Citizen
NATIONAL NEWS - The lobby group, Women and Men Against Child Abuse, says its outraged that former tennis great Bob Hewitt is not sitting behind bars.

The 75-year-old Hewitt was jailed yesterday for an effective six years on Monday for raping and sexually abusing three women, who were former tennis students of his.

His bail was however extended pending an application for leave to appeal which will be heard on June 19th.

The Director of Women and Men Against Child Abuse, Miranda Friedman, says Hewitt is a convicted and sentenced child rapist who has shown no remorse.

'Bob Hewitt is a convicted and sentenced child rapist - worst of the worst - nothing more horrific to be found guilty of in this world! We at WMACA are extremely angry at the justice system in South Africa that allows a child rapist, convicted of multiple rapes over a long period of time, to stay out of jail after his conviction and sentence - this is a blow for his victims who have come from afar again - expecting justice to prevail!' she said.

Friedman says members of her organisation will be at court next month when Hewitt's lawyers will argue their application for leave to appeal his conviction.

'Hewitt must serve time to feel the consequences for what he did to others, nothing else will give him that message. Abuse is about power and the State must take his power away from him and imprison him to feel what it's like to be imprisoned by something that you have no control over - to cause him the pain that he caused his victims who had to suffer in their silence for a very long time until our legal system allowed the law to take its course.' he is lucky that Judge Bam took his age and health into consideration giving him a lenient sentence of effectively 6 years in prison" she added
Source: Algoa FM