Old Motorcycle Worshiped as a Deity in India 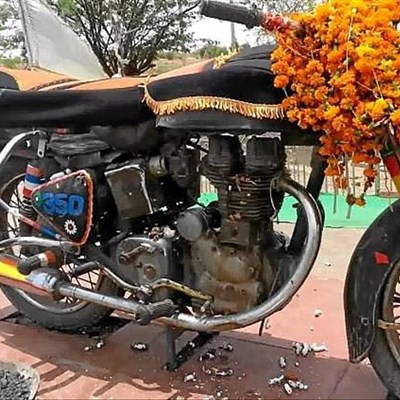 Garlands and other smll favours are left with the bike to ask for a safe journey. Alcohol is also acceptable.

MOTORING NEWS - In the Indian state of Rajasthan, some 50km from the city of Jodhpur, along National Highway 65, there is a temple.

That is not unusual, as temples are virtually everywhere in India, but what is strange is that the deities worshiped here are an old Royal Enfield 350cc motorcycle and its deceased owner.

The story of the "Om Banna" or "Bullet Banna" temple dates back to an accident that occurred almost three decades ago.

On 23 December 1988, Om Singh Rathore, the 23-year-old son of a village elder in Chotila, Pali district, was riding home on his motorcycle when he lost control. He hit a tree and was catapulted some distance, where he died on the spot. His body was discovered the next day and the broken "Bullet" motorcycle was taken to the police station.

That's where things started to get weird.

Legend has it that the police soon discovered that the recovered motorcycle was missing. It was later discovered at the scene of the accident and brought back to the station.

Suspecting that it had been taken by relatives of the deceased, they emptied the petrol tank and removed the chain, but once again the vehicle disappeared and showed up at the accident spot.

Fearing occult forces, the police returned the bike to Om Singh's family, who allegedly sold it to a man in Gujarat. Once again it reappeared at the site of the accident, 400km away. The new owner apparently didn't want it back after that.

Many people became convinced that both the Royal Enfield and its deceased rider were deities to be worshiped. They soon built a small temple at the site of the accident, with a shrine for Om Singh Rathore and a protective glass case for the bike. The bike that kept coming back to the scene of its accident is now considered a deity.

Nowadays, thousands of people from all over Rajasthan come to the Bullet Banna Temple to worship the unusual deities and ask for favours.

Local taxi and bus drivers, tourists driving on National Highway 65 and relatives of lorry drivers often stop at the temple to pray for a safe journey.

They believe that Om Singh and his Royal Enfield motorcycle will protect them on the road and bring them back home safely. The "Bullet Bike" in its case.

Many swear that since the temple was erected, road accidents on the highway decreased dramatically.

The most popular offering at the Bullet Banna temple is alcohol, preferably hard liquor, like whisky. That's pretty strange, considering people come here to ask for road safety, but if it's not the driver doing the drinking, it's probably okay.

The motorcycle temple of Rajasthan has become so popular that it now has its own full-time priest in charge of upkeep. He performs daily rituals and collects donations.

Across the road, vendors have set up a commercial complex, where visitors can buy mementoes - from alcohol offerings, flowers and sacred threads to tie on the wheels of the Royal Enfield, to key-chains and postcards. 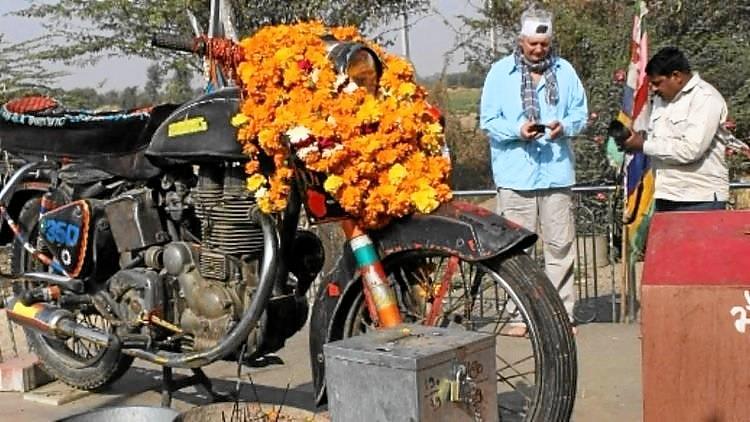 Business appears to be brisk, with some shops open 24 hours a day.

Legend has it that sometimes, on the date of Om Singh Rathore's fatal accident, his beloved Royal Enfield motorcycle starts by itself. It may be just a made-up story, but to the devotees at Bullet Banna temple, it doesn't matter.