General  Garden Route shows 13% decrease in new Covid cases           Business  ATMs: 70% will have to close under current regulations to sanitise           National  DA gives Ramaphosa 7 days to give full vaccination plan… or else           International  Fauci says Biden goal of 100 million doses in 100 days 'can be done'           National  It’s each university for itself with different academic plans in the tertiary sector
Loading

INTERNATIONAL NEWS - French judges have ordered a trial for seven people accused of orchestrating an audacious scam to trick rich targets out of millions of euros by impersonating of one of France's top politicians.

Armed with a silicone mask and plenty of nerve, the suspects sought to convince business chiefs, heads of state and other high-profile prey that they were speaking to Jean-Yves Le Drian, currently the foreign minister.

Two Franco-Israeli suspects, Gilbert Chikli and Anthony Lasarevitsch, are thought to be the masterminds of the group facing trial for fraud, under a ruling by investigative magistrates seen by AFP.

The pair were arrested in Ukraine in August 2017, two years after Chikli was convicted in absentia in France to seven years in prison for "fake CEO" scams in 2005 and 2006.

After fleeing France for Israel in 2009, investigators say Chikli and his associates embarked in 2015 on a new hoax: posing as Le Drian, who at the time was defence minister.

Sometimes they simply called their targets, but in video conferences, a man would also don a silicone mask and pose as Le Drian asking for behind-the-scenes help in delicate matters of state.

The targets would be asked to wire money to secretly pay ransom for hostages - despite France's official refusal to negotiate with kidnappers - or to finance top-secret anti-terrorism operations.

The group even tried to convince the Tunisian government to put up 19 million euros ($21 million) to buy four Airbus Tigre attack helicopters. 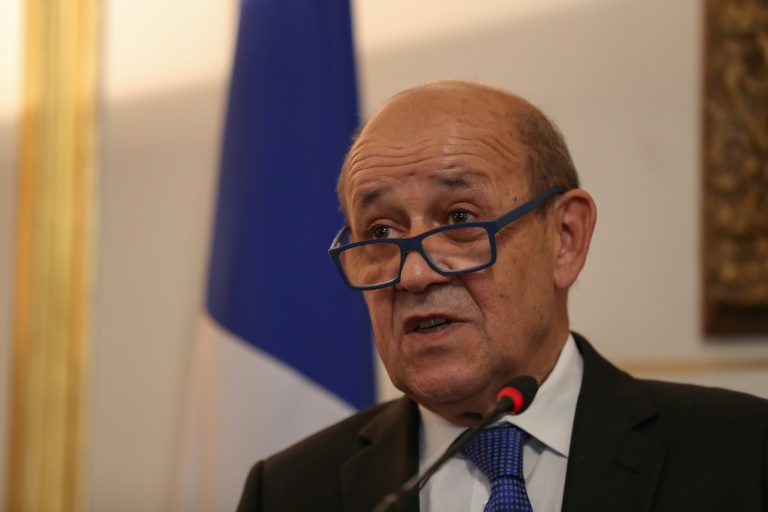 French investigators say hucksters tried to impersonate Jean-Yves Le Drian when he was France's defence minister in 2015 and 2016.

In the end, only four people fell for the scam, not least Prince Shah Karim al-Husseini, better known as the Aga Khan.

In March 2016, the Ismaili spiritual leader, then aged 79, had his AKDN foundation make bank transfers totalling 20 million euros to accounts in France, Poland and China.

Some of the transfers were later blocked, but eight million euros disappeared without trace.

Another victim was Turkish business magnate Inan Kirac, who wired more than $47 million to Chinese and United Arab Emirates accounts thinking he was paying a ransom for two journalists held hostage in Syria.

Investigators say those who fell for the scam were contacted only by telephone, and did not see the fake Le Drian by video.

Since Chikli's Ukraine arrest and extradition to France, investigators became convinced he led the fraud, based on voice analyses and reviews of his correspondence.

On phones belonging to Chikli and Lasarevitsch they found pictures of a silicone mask of their next impersonation: Prince Albert II of Monaco.

Both men have denied any role in the fraud.

Interviewed by French television in 2010 over previous scams targeting businesses such as HSBC or Alstom, Chikli said he was intrigued by the "game" of scamming.

"You've either got the gift or you haven't, it's like famous actors. When it comes to me, you can say that I have a gift," he said.

His story inspired a 2015 film, "Je Compte Sur Vous" (I'm Counting on You), with French actor Vincent Elbaz in the starring role.