Protesting voices have grown louder in Germany, putting pressure on Chancellor Angelaq Merkel and her government to strike a broad climate deal

INTERNATIONAL NEWS - Chancellor Angela Merkel's government struggled Friday to find a deal on a broad climate plan despite overnight talks dragging over 12 hours, as protesters prepared to ramp up the pressure for change.

The plan, which covers a slew of measures from tackling emissions in the energy and industrial sectors, to incentives for zero-emission electic vehicles or public transport, was due to be unveiled on Friday.

But after a marathon session through the night, sources close to the talks said Merkel and other political leaders were still locked in negotiations.

A key sticking point was the question of how to better price harmful carbon emissions from oil, gas and coal into economic activity in order to incentivise clean alternatives.

While Merkel's party wants to expand the trading of emission certificates, her junior coalition partners, the Social Democrats, have called for a carbon tax.

The EU's biggest economy is set to miss climate targets for next year but has committed itself to meeting the 2030 goal of a 55 percent cut in greenhouse gas emissions from 1990 levels. 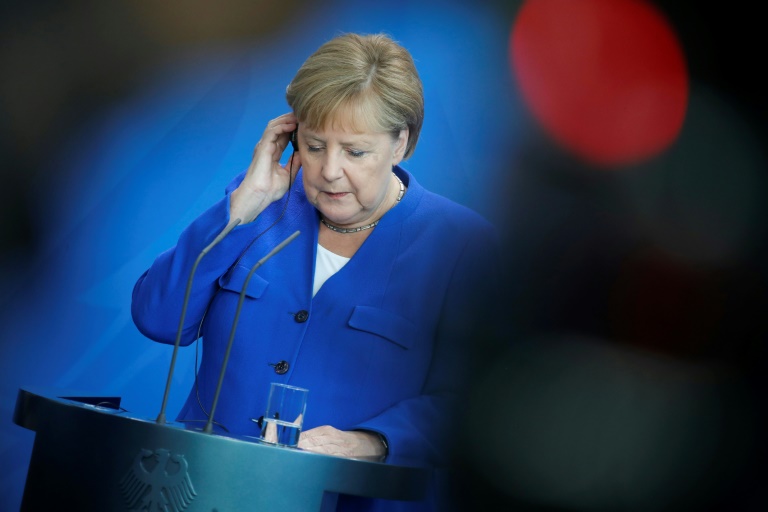 German Chancellor Angela Merkel and other political leaders were still locked in negotiations after a marathon overnight session to agree a climate plan.

As Merkel's government haggled over its climate plan, the Fridays for Future youth movement was preparing its biggest international wave of protests.

Merkel, a scientist by profession, was once known as the "climate chancellor" as she pushed forward a green energy transition that vastly increased clean renewables such as wind and solar power.

However, many of those gains have been eroded by an increased reliance on dirty coal, in part to offset the phase-out by 2022 of nuclear power that Merkel decided after Japan's 2011 Fukushima disaster.

Her government this year announced a coal phase-out by 2038, but faces local opposition from mining regions, especially in the ex-communist east, where the far-right AfD party has capitalised on fears over job losses.

Car-mad Germany has also lagged badly behind in the transport sector, where state-coddled auto giants VW, Daimler and BMW have long focused on gas-guzzling SUVs more than hybrid or zero-emission electric cars.

Mindful of the 800,000 jobs tied to the auto sector, Merkel's government faces a tight balancing act as Germany is forecast to slide into recession in the third quarter.

But the young warn that the threat is existential with consequences during their lifetimes.

"We are heading for a life-destroying crisis and so far nothing has happened," said Linus Steinmetz of the student movement.

"That's why we're raising the pressure - together we're strong."