The mission is China's first crewed spaceflight in nearly five years, and a matter of prestige for the government as it prepares to mark the 100th birthday of the ruling Communist Party on July 1 with a propaganda blitz.

INTERNATIONAL NEWS - The first crew for China's new space station prepared to blast off this week for the latest step in Beijing's ambitious programme to establish itself as a space power.

The mission is China's first crewed spaceflight in nearly five years, and a matter of prestige for the government as it prepares to mark the 100th birthday of the ruling Communist Party on July 1 with a propaganda blitz.

A Long March-2F rocket carrying three astronauts in the Shenzhou-12 spacecraft is slated to lift off from a base in northwest China's Gobi desert on Thursday, according to experts with knowledge of the matter.

They plan to spend three months on the Tiangong station, China's longest crewed space mission to date, with spacewalks among their tasks.

The astronauts will aim to "get their new home in space kitted out and ready to use," said Jonathan McDowell, an astronomer at the Harvard Smithsonian Center for Astrophysics.

"It's a practical goal rather than a groundbreaking one."

The Long March rocket, with the Shenzhou craft attached, was moved to the launch pad at the Jiuquan Satellite Launch Center last week, according to the Chinese space agency. 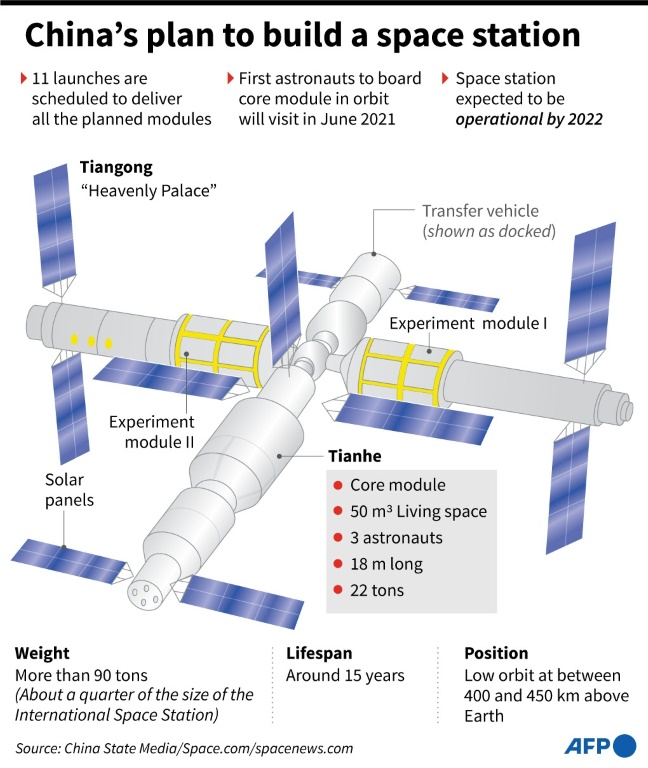 Shenzhou-12 will dock with the main section of the Tiangong station, named Tianhe, which was placed in orbit on April 29. A cargo craft last month transported fuel, food and equipment for the crewed mission.

Another 11 missions are planned over the next year and a half to complete the construction of Tiangong in orbit, including the attachment of solar panels and two laboratory modules.

Three of those missions will carry astronauts for crew rotation.

"Keeping the station up and running smoothly involves much detailed and complicated work, as we saw on the International Space Station during its early days," said Chen Lan, an analyst at GoTaikonauts, which specialises in China's space programme.

"In fact, ISS construction was much slower" than the Chinese station.

Once completed, Tiangong will have a mass of around 90 tonnes and is expected to have at least a 10-year lifespan, according to the Chinese space agency.

It will be much smaller than the ISS, and similar to the Soviet space station Mir, which was launched in 1986 and decommissioned in 2001.

China has invested billions of dollars over decades to catch up with established space powers such as the United States and Russia. 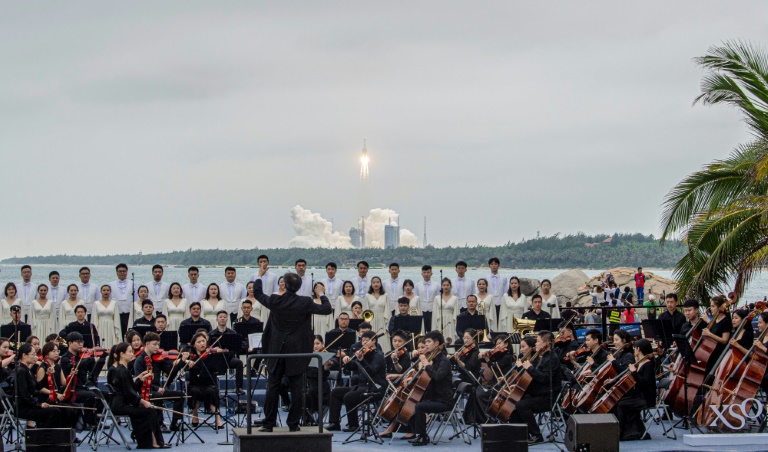 China launched the core module of its new space station in April.

It has so far sent humans into space, probes to the Moon, and last month landed a rover on Mars - a rare and prestigious space-faring achievement.

China's desire for a human outpost of its own in Earth orbit was fuelled by a US ban on its astronauts on the International Space Station, and it is now days away from placing the first crew on Tiangong.

State media reported in October last year that astronauts have been selected for all four crewed missions, but officials have been tight-lipped about their identities.

All 11 Chinese astronauts to date have been military pilots.

A long-term human presence in space would be a significant leap in China's space programme. 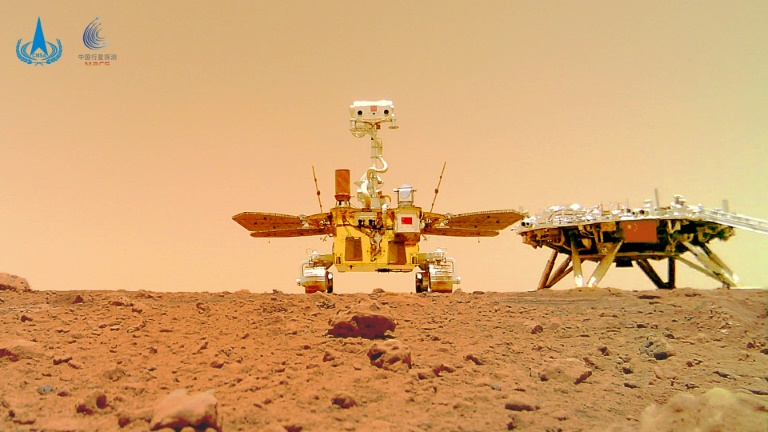 China successfully landed a rover on Mars this year, the major achievement in its ambitious space programme.

President Xi Jinping called China's space station a key step in "building a great nation of science and technology" after the launch of the Tianhe core module in April.

The International Space Station - a collaboration between the United States, Russia, Canada, Europe and Japan - is due for retirement after 2024, although NASA has said it could potentially remain functional beyond 2028.

It sets up a scenario where Tiangong could be the only operational space station.

While China does not have specific plans to use it for international cooperation, its space authorities have said they are open to foreign collaboration.