KNYSNA NEWS - The use of a drone to fight crime in Knysna came in more than handy last week when joint efforts by the police, traffic officials and local security personnel led to the arrest of two suspects as well as the recovery of an unlicensed firearm following a robbery at a spaza shop in Knysna.

According to Southern Cape police spokesperson Sergeant Christopher Spies, three of the four occupants of an Opel Corsa fled when provincial traffic officers stopped a vehicle on the N2 at White Bridge at 20:20 last Tuesday evening, 20 April.

The men disappeared into bushes next to the road and the traffic officers immediately alerted the police and local security personnel, who responded to the scene.

The police arrested the 32-year old driver who did not manage to flee and, searching the Corsa, discovered items linked to a robbery at a spaza shop about an hour earlier. The vehicle was allegedly used as a getaway vehicle during the robbery, Spies said.

He confirmed this week that the use of a drone formed part of the ongoing investigation into the arrest of the two suspects aged 32 and 30. The firearm which was recovered during the arrests.

In his statement last week, Spies said at first light on Wednesday, security personnel of Allsound Security responded to information about a suspicious-looking man seen near where the trio disappeared in the bushes.

"When the man saw the response teams he fled, but his freedom was short-lived when they caught up with him.

"The suspect was later linked to the robbery," said Spies.

"The joint effort by all the role players continued with an extensive search of the bushes and led to the recovery of an unlicensed firearm, an undisclosed amount of cash, cigarettes and blue overalls."

Night-time drone search
According to Christopher Gould of the Knysna Safety and Security Initiative (KSSI), Allsound Security received a request from the local police to deploy KSSI's Cyclops thermal imaging drone to help apprehend the three suspects who fled from the vehicle.

"The traffic officer had been able to apprehend the driver but the other three occupants of the vehicle fled. Allsound manager Michael Simon launched the drone from the Knysna end of the White Bridge, because it was pitch black. Neither visible nor MSX imaging were available and only IRR thermal imaging could be used," said Gould.

He said the suspect was spotted along the right riverbank several metres away.

"He broke into a fast run as the drone approached. The police were notified immediately and, together with Allsound operations manager Brandon de Bruin and the provincial traffics, raced up the road on the riverbank to give chase. The suspect took cover," he said.

Gould said Simon could see the pursuers and their vehicle on the thermal screen and, using the screen compass, directed them towards the suspect via radio communication with De Bruin.

"The drone returned to the home point for a fresh battery and because the heavy mist over the river had caused the camera gimbal to temporarily lock, requiring a reboot on the ground. It flew back up the river and spotted the suspect again, much further up the river. He broke into a run. The suspect was 850 metres from the home point and running very fast and despite their best efforts the pursuers were a distance away and not able to catch up," said Gould.

After being brought back for a third battery, the drone flew out for about one kilometre on the third flight, but was unable to locate the suspect.

"Radio contact with the drone was hampered by an intervening hill, requiring the drone to gain altitude and making detection more difficult. The next morning the suspect was picked up by Allsound artificial intelligence camera monitoring in an estate close to his last known location and was apprehended by responding Allsound officers," Gould said.

The use of the drone kept the suspect away from the N2, making it possible for him to be picked up the next morning by cameras in his desperate attempt to head in a different direction to avoid capture.

KSSI's Ray Ferguson said the drone played a large role in the capture of the suspect. "Without the drone the suspect could have been long gone," he said. The robbery
In his statement last week, Sergeant Christopher Spies said investigation into the robbery indicated that four men, at least one armed with a firearm, had entered a Spaza shop at Concordia on Tuesday at about 19:30.

"They threatened the victims and forced the patrons to the floor. The suspects took an undisclosed amount of cash, cigarettes and cellphones before they fled the scene. Both suspects, aged 32 and 30, remain in custody. They will appear in the Knysna Magistrate's Court on Friday 23 April on charges of business robbery. Their accomplices are yet to be arrested," Spies said.

Eden Cluster Commander, Major-General Oswald Reddy, praised all role players for their vigilance and commitment in pursuing these suspects. He also commended them for the removal of an unlicenced firearm from the streets. 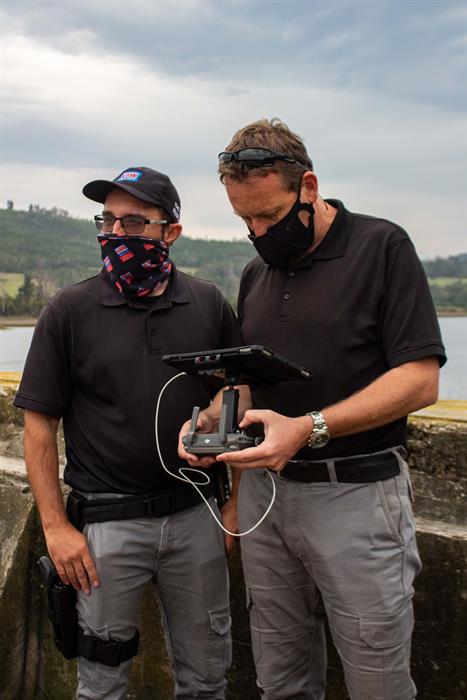