Suspects arrested at Nekkies during a Plettenberg Bay bust.

GARDEN ROUTE NEWS - Stakeouts, a high-speed chase, a shootout and millions of rands worth of drugs… While this might sound like scenes from an action-crime movie, this is what happened when Plettenberg Bay and Knysna crime fighters stopped burglary and cannabis-smuggling suspects in their tracks this week.

The scene started to unfold in Plettenberg Bay on Monday night when a suspicious-looking vehicle was spotted.

The town's crime prevention association (PBCPA) operations head Otto Olivier said its tactical response unit has been working closely with local police in following up on leads involving a gang of suspects allegedly involved in several Garden Route burglaries where gaining access to properties through roofs was the modus operandi.

This type of crime has plagued the area, especially Plettenberg Bay, for several months, and saw the theft of millions of rands' worth of cash, jewellery, electronic equipment and other valuables. The most recent target area seems to have been Keurbooms where, during most incidents, the suspects watched the homes carefully before striking while the owners were out.

On high alert
Olivier said one of the vehicles identified in the investigation was spotted entering Bitou from the Eastern Cape last week. On Monday, this same vehicle, with four suspects, was spotted by one of the unit's members moving out of Kwanokuthula, he added. "The member followed the car and on his alert, police detectives mobilised to intercept. A high-speed chase ensued when the suspects unfortunately spotted the tail in the Longships area. The vehicle was however later lost in Qolweni," he said.

The tactical response unit and detectives responded by flooding the area and during a meticulous search of the area, Olivier said, the suspects were spotted jumping from the vehicle and fleeing towards houses in Qolweni. "Detectives quickly secured the car for evidence while the rest gave chase. One suspect was spotted jumping a wall and in his attempt to get away, he fired a shot at the tactical unit member who fired back. As there was a children's daycare centre nearby, the chase was halted so as not to place the children or the residents at any risk."

The various crime fighters were relentless in their pursuit, however, which led to the arrest of a suspect. Olivier said this was accomplished with the help of Qolweni residents whose "intel" led Bitou law enforcement officers to where the suspect was hiding in a house. He was arrested and handed over to police.

No backing down
Crime fighters did not give up on the other three suspects either and continued with their surveillance of the area.

"We knew the suspects were not from Plett and therefore covered key points in areas where we knew they might be lying low."

At about 21:00 that night the team spotted the suspects loading bags from one vehicle into another in Kwanokuthula before speeding off in the direction of Knysna.

Olivier said they immediately gave chase. "During a high-speed chase, several inter-town crime-fighting partners assisted when a Knysna police officer managed to stop the vehicle at Nekkies. The three suspects were arrested and the vehicle searched. Olivier said police found that the bags they had earlier observed contained cannabis.

The PBCPA's Marius Venter said the bags contained 7kg of high-quality cannabis, the same as what was found during a massive bust last week, with a total street value just short of R17-million.

Local police confirmed the arrests and Knysna's Captain Dewald Kitching said the three suspects caught near Nekkies, aged between 24 and 26, were expected to appear in the Knysna Magistrate's Court this week. 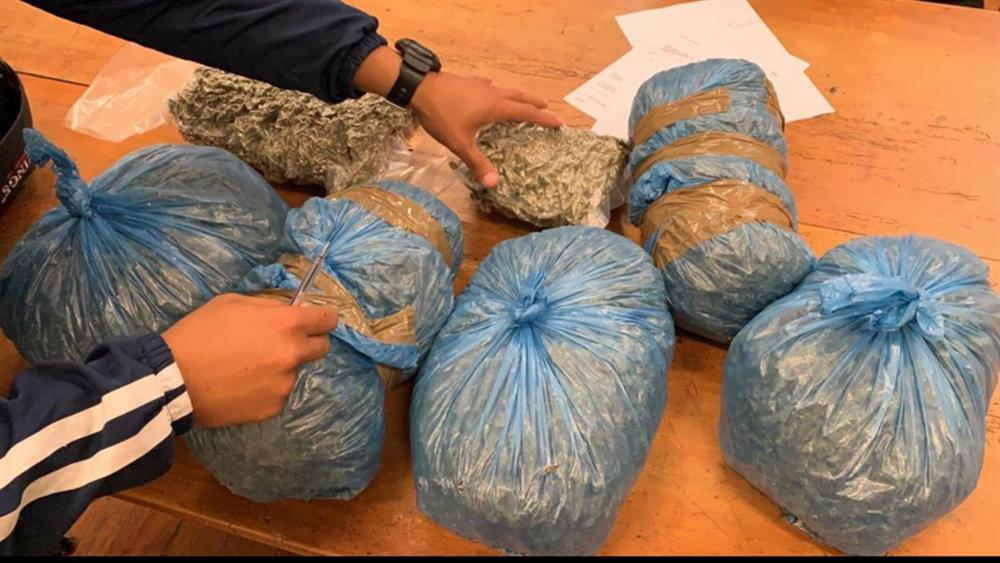 About 145kg of cannabis confiscated during a bust at the Tsitsikamma Toll Plaza.