No time to dawdle 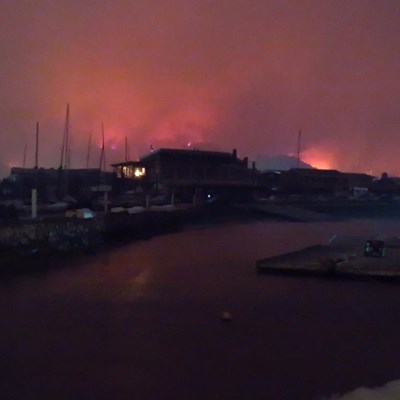 Fires flare up around Knysna as we stand watching helplessly from the Knysna Yacht Club on Wednesday evening, June 7 into early Thursday morning, June 8. Photo: Stefan Goosen
KNYSNA NEWS - When we here at the Knysna-Plett Herald were tasked with writing about our own experience of the onslaught of the Knysna fires, the first thing I thought was, where do I start? How do I put into words what I have experienced and witnessed?
Although at one point I had thought I'd lost everything I owned, I survived and found my home in Rheenendal in one piece. Nothing like the many residents who have lost so much, whether it be from the wind that pushed the flames onwards and over the town or from the inferno itself.
The saga of the Knysna fires started on Tuesday, June 6 for me.
We knew a huge storm was approaching, but what can a little wind and maybe some rain really do?
Wednesday morning, even before the crack of dawn, I was out of bed and on my way to work as it was the day we go to press. Final changes to stories, uploading the last few photographs – that is what was occupying my mind.
Never could I have imagined what an absolute apocalyptic nightmare the day would turn into.
Reports were coming in from all over about fires raging out of control near my home. Between the little information I could gather from my landlords – who were busy dealing with their own problems at that time – and my neighbour, it seemed imminent that my home would be destroyed.
Getting back to Rheenendal would prove impossible by midday, too, as the N2 had been closed off due to fire between Buffalo Bay and Knysna.
Despondent, I turned back to town, still trying to find out what exactly was happening at home and trying to sift through the mounds of reports from residents, police, the municipality, district and provincial government to make sure the correct information got out there, never mind fielding questions from other media.
This is also when one starts thinking about family, friends, even your everyday acquaintances… You start thinking about the silly little pieces of memorabilia scattered around your home. A photograph… A gift from my brother from years ago…
At this point we were blocked in from both sides in Knysna. Shut off from the outside world with flames creeping ever closer.
We finished the work day, but going home was still not an option. My editor, Elaine King and her partner Mark Taylor became my proverbial pillars of strength although they might not have known it.
After leaving the office in a state of panic, we arrived at Elaine’s house in Upper Town where we thought we would be safe, but found her home also in danger. While Skyping with eNCA as we were the only journalists on the ground at that stage, still Wednesday, we tried evacuating Elaine’s area as quickly as possible.
Shelter was found at the Knysna Yacht club where we spent a sleepless night, continuously trying to update the town and the rest of South Africa on what was happening.
We could see flames all over Knysna. Again, that uncomfortable, unsafe feeling enveloping you as the flames were the same with Knysna. “Are we done for?” we asked ourselves.
The lack of sleep, constant updating of information and relentless phone calls from media houses and panic-stricken residents continued.
The last sigh of relief I uttered before Sunday, was on Thursday, June 8 when a chance to get home came up.
Driving home that morning, filled with fear and anticipation of what I might find, the destruction along the always picturesque Rheenendal road hit me like a sledgehammer.
How did this happen?
My home was safe. I cried. After packing my car to maximum capacity with my belongings I went back to work. There was no time to dawdle.
All around, residents of Rheenendal were battling the flames. This is where I say thank you to my heroes along Highway West. These men and women, all volunteers from the surrounding farms and community, would not give up. They saved my and many other people’s homes.
Since that day it has been about work and keeping watch. The neighbours and I slept in shifts to make sure no smouldering fires flared up and threatened us again. They, too, were very important to me during this time. Having support and people who stand with you and look after you in a time like this is amazing. A sense of safety returns to your insides. You can go on a little longer.
I have heard many sad stories since then. I have spoken to many broken people since then. I have met many other heroes since then.
My car is still packed. I am still on alert. And work continues.
One thing I know for certain: a catastrophic event like this has brought many people from many different walks of life together. My greatest wish is that it will stay this way, that we will remember we are better together, and that it won’t take another attack from Mother Nature to awaken our humanity.
Me and my car packed to the brim. Photo: Stefan Goosen
ARTICLE: STEFAN GOOSEN, KNYSNA-PLETT HERALD JOURNALIST
'We bring you the latest Knysna, Garden Route news'