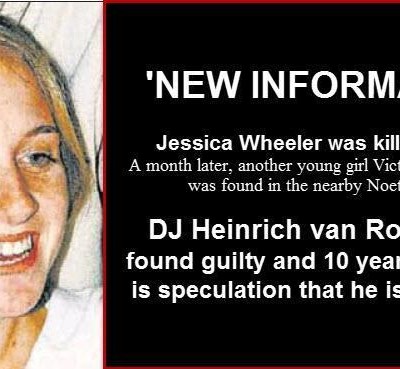 Jessica Wheeler
KNYSNA NEWS - The renowned author of the book The Tall Assassin, Alan D Elsdon has sparked an outcry that the 2005 murders of Jessica Wheeler and Victoria Stadler should be re-investigated and there is renewed speculation that the man convicted for the murders, DJ Heinrich van Rooyen, who has already served ten years of his 30-year prison sentence, may be innocent.
The 18-year-old Jessica Wheeler was found murdered in the St. George's Anglican churchyard in Knysna on October 13, 2005. A month later, another young girl Victoria Stadler's body was found in the nearby Noetzie Forest. Ever since his arrest, Van Rooyen has remained steadfast that he was innocent of the heinous crimes.
Elsdon told the Knysna-Plett Herald, "After learning of Van Rooyen's plight in 2013, I decided to study the case. In 2014, I visited him at the St Alban's Prison outside Port Elizabeth. When I left the prison about two hours later, I was convinced of his innocence. I then acquired the full court records of his case and managed to obtain documents pertaining to the autopsies, statements made to the police and other records."
Elsdon made his findings available to the police.
Renowned author, Alan Elsdon, recently provided the police with crucial information to support his belief that Jessica Wheeler and Victoria Stadler's convicted murderer is in fact innocent. ©
Captain Malcolm Pojie, spokesperson for the Southern Cape Police, said on Tuesday, July 7, "What I can confirm is that detectives from our provincial office in Cape Town had been sent to follow up information they received from a source that we cannot reveal.
"As a result, detectives from our provincial office met with the Knysna detective commander and also scrutinised the filed docket pertaining to the murder. Bear in mind that the investigation is finalised following the conviction and sentencing of Heinrich van Rooyen.
"However, we have an obligation to investigate the allegations (so-called new information) irrespective the outcome. The authenticity as well as the origin of the information need to be investigated."
Elsdon said that ten years after the murders "new evidence" will again put the murders that horrified Knysna under the spotlight. "According to sources, a specialised police unit from the Western Cape is involved in the investigation. Members of the unit visited the town this week and interviewed police officials and witnesses involved in the two cases," he said.
He explained that his investigation revealed that the two girls had socialised at the same nightclubs. A third person, Peter Mc Helm, was murdered on the same early morning as Stadler and in the same vicinity (Noetzie Forest).
Their partly decomposed bodies were found four and five days later. This added fuel to the rumours that a serial killer operated in the holiday town of Knysna.
Elsdon explained that the SAPS arrested Heinrich van Rooyen who was a DJ at Stones, a popular nightclub frequented by both young women whom Van Rooyen knew as friends. To assist the local SAPS, a police director arrived from Cape Town to head the investigations. A day later, Van Rooyen, who had been detained as a suspect was released.

Jessica Wheeler.
"In the next few days the SAPS in Knysna (under professional guidance), experienced a host of 'major breakthroughs', one of which was 'finding' an 'eyewitness' to the murder of Jessica Wheeler, forty days after she had been murdered," Elsdon explained.
This witness became key to the state's case. He placed Van Rooyen together with the deceased at the scene of the crime (at about 02:45 on October 13, 2005).
Private investigators assisted Van Rooyen and his family and they found another witness to Wheeler's murder. "The version of the young coloured male, a car guard, differed vastly from that of the police's 'eyewitness'." The car guard later passed a polygraph test.
Elsdon said that most of the evidence gathered by the SAPS thereafter was of a forensic nature. Soon thereafter, Van Rooyen was arrested. He was charged with the murders of the two girls and bail was denied.
"In the buildup to the court case, a number of instances occurred where defence witnesses (the young car guard and a female petrol attendant) were intimidated by members of the SAPS. At the commencement of the trial, the state presented a mountain of 'irrefutable' forensic evidence against Van Rooyen."
According to Elsdon: "The defence missed out on crucial elements during the cross-examination of witnesses. Worse, they even allowed crucial and sceptical forensic evidence to be entered into court record without demanding that the SAPS show the necessary chain of custody of such exhibits."
Other witnesses were called by the state/SAPS before the testimony of the "all-important 'eyewitness' to the first murder" (Jessica Wheeler). Elsdon said, "At times the witness was at a loss to provide an acceptable answer to simple questions and the defence hardly pressed on the issues. At the same time the judge and prosecution simply allowed the weak testimony to ease into the court record."
He continued: "When Heinrich eventually stated his case and called his witnesses, they were absolutely 'trashed' by the SAPS, the prosecution who put the extremely young car guard (16 years old at the time of the murder), under immense pressure during his testimony. Again, the defence did not make a concerted effort to protect or prevent their witnesses from the unprofessional attacks."
In the end, the trial judge leaned heavily on the testimony of the state's eyewitness and especially the forensic evidence presented by the SAPS. He found Van Rooyen guilty and labelled him "a monster serial killer".
Van Rooyen was sentenced to an effective 30 years' imprisonment without parole. His appeal case was turned down.
Since then and up until today, Van Rooyen has maintained he is innocent of the murders.
There has been mention made of his case in books and as recently as a few months ago, in a film documentary. Many believe in his innocence but are at a loss in terms of the way forward.
"Recently (between March and May 2015), I spent three months in Knysna. In my investigation, I discovered the testimony provided by the state's 'eyewitness' was nothing less than complete perjury!
Further, the testimony he provided could only have originated through cohesion from a member or members within the SAPS investigation team," Elsdon said this cohesion also pertains to the "so-called 'photo ID' session held, where the 'eyewitness' was able to point out the 'suspect' he saw at the crime scene, Heinrich van Rooyen".
"This showed the SAPS played a prominent role in perjury, the miscarriage of justice and, of course, massive corruption (evidence indicates that exhibits were tampered with to frame Heinrich van Rooyen)."
Elsdon added that the eyewitness he recently found made a written statement to an independent attorney and explained how he was a witness to the murder of Wheeler. He explained that the person who murdered her in the Anglican churchyard was "a ‘witness' who had falsely testified in court against Van Rooyen".
Click here for a previous news flash.