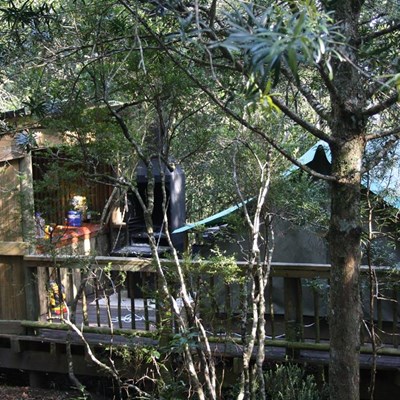 Tented camping decks have recently been introduced to the Knysna Forest.
GARDEN ROUTE NEWS - Events in the Garden Route National Park (GRNP)boost eco-tourism in Knysna and contributes to the economy directly and indirectly.
There are approximately 34 events held annually in the Knysna section of the GRNP, including cycling races, trail runs, hiking events, swimming competitions in the estuary, boating and vessel sporting events.
According to Nandi Mgwadlamba, spokesperson for SANParks in the Knysna office, an event application process goes through a centralised office and organisers have to obtain a permit from SANParks and also agree on a fee structure or tariff. "This amount is replanted into conservation efforts."
General manager of the GRNP, Jill Bunding-Venter, said: "The picture-perfect, open-access park has become the ideal playground for adventure seekers. It is approximately 155 000 hectares of land including indigenous forests, lakes, rivers, wetlands and the sea."
During the Knysna Oyster Festival alone, the following events run in and through the Garden Route National Park:
* The Momentum, Weekend Argus Cycle Tour is a mountain biking event that was initiated in 2013. The 30km race goes through popular areas of the Knysna Forest such as Kom-se-Pad and Gouna.
* The Knysna Dragons Lagoon Swim takes place in the Knysna Estuary, a protected lakes area that is now part of the Knysna section of the GRNP.
* The Forest Family Hike attracts families for three days in a year to Harkerville (Knysna Forest) easily accessible from the N2.
* The Momentum Cape Times Knysna Marathon: this year marked the 32nd year since the inception of the marathon. Runners pace from one part of the indigenous forest to the next in either a 21km half-marathon or a full 42km run.
* The Houtkapper Trail Run takes place in Goudveld, a historic mining town in the middle of the forest.
Bunding-Venter said 'zoning' is a technique used by SANParks to identify areas for events. "These are often on an existing footprint in line with the management of the area as prescribed in the park’s management plan."
On March 6, 2009, three national parks in the Garden Route were amalgamated to form the GRNP. The Tsitsikamma National Park and Wilderness National Park were included into the GRNP on February 11, 2011 along with the Knysna Lakes Protected Area.
The former Lakes Area, now called the Knysna section of the GRNP, includes the National Lake Area which was proclaimed in 1985 in order to protect the Knysna Estuary as well as approximately 41 538.6 hectares of State Forestry land in the Southern Cape and Tsitsikamma.
This land is scattered on the narrow coastal strip to the South of the Outeniqua and Tsitsikamma Mountain ranges, between George in the West and Kareedouw in the East.
For more on events in the park, contact the planning division's Len du Plessis at len.duplessis@sanparks.org or 044 302 5600.
A timeline of events is clearly displayed and provided by people and conservation officer for Knysna (Melaney Barrath) with the assistance of the Knysna Historical Society.
A group of journalists and SANParks staff pose next to the King Edward Big Tree in Diepwalle (the Outeniqua Yellowwood tree is more than 500 years old). From left are Nandi Mgwadlamba, Jason Stanley (Eden FM), Snazo Gulwa (Eden FM), Johan de Klerk (area manager for Knysna), Pieter Cloete (Knysna FM), Len du Plessis (planning manager for SANParks), Heidi Sonnekus (freelance writer), Sagree Chetty and Tanya Krause (SABC), Calvin Heath (SANParks). Photos: Christo Vermaak.
'We bring you the latest Knysna, Garden Route news'

19 %
Shopping? No money, I am relying on others