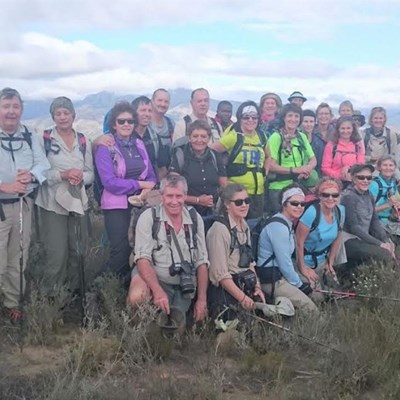 Hikers on the Eden to Addo Great Corridor hike from Diepwalle in the Knysna. Photo: Supplied.
KNYSNA NEWS - Despite raging fires that ravaged the region heralding spring, 26 intrepid adventurers set off as planned on the Eden to Addo Great Corridor hike from Diepwalle in the Knysna forest on September 3.
Their spirits were not to be dampened by the torrential downpour which marked the first day of their expedition.
Though their route was not identical to the one originally planned, these hikers remain set to cover the 400km trek through one of the most biodiverse trails in the region.
They set off along the Outeniqua trail to Fisanthoek, essentially in the opposite direction to the one they had intended going, and then on to the Kranshoek view site where they camped and also explored the coastal parts of the Robberg Coastal Corridor as far as Cairnbrogie.
On Tuesday morning, September 6, the hikers were transported to the Langkloof to continue along the planned route as of day five of the planned itinerary. Days two, three and four of the original itinerary had to be scrapped due to fire damage at two of the campsites. They are currently in the foothills of the Kouga Mountains, the Cape leopard’s terrain.
They will traverse the Kouga Mountains and then drop into the Baviaanskloof via the Skilderkrans Corridor and head towards Koue Nek if all goes as planned.
The landscape of red rocks and thorny bush requires countless river crossings. Rhino, buffalo, kudu and tortoises are the native inhabitants of this region. This journey’s end is deep in the Kabouga region of Addo on September 23.

Hikers on the Eden to Addo Great Corridor hike from Diepwalle in the Knysna. Photo: Supplied.
Click here for related articles:
'We bring you the latest Knysna, Garden Route news'