Residents urged to be extra vigilant

Security camera footage shows the suspects outside a Keurbooms River home that was broken into.

PLETTENBERG BAY NEWS - Plettenberg Bay crime fighters have warned residents to be vigilant after an increase in robberies and burglaries over the past two months.

Marius Venter from the Plettenberg Bay Crime Prevention Association (PBCPA) said they have noticed an increase in cases where suspects gain entry to homes through the roof and windows without burglar bars.

"The group mostly target unoccupied holiday homes and in several of these incidents, the criminals went in with one goal – to gain access to safes containing jewellery," Venter said.

Removing safes
He said that in some cases the victims' safes were taken from the properties and the contents removed elsewhere.

"The criminals use sophisticated equipment and have no set time for executing the break-ins. In recent days we were called out to an armed robbery while a well-known family was relaxing and watching television in their secure estate."

Gun-wielding suspects
The usually peaceful hamlet of Keurbooms River was rocked by an armed robbery on 25 June when four suspects invaded a home in the Strandmeer Private Estate, overpowered the owners and made off with valuables worth more than R800 000.

Police spokesperson Captain Marlene Pieterse said the complainant and his wife had been watching television at around 19:30 when he suddenly saw four men in his home – all wearing balaclavas.

It is believed the assailants gained entry through an unlocked kitchen door.

Pieterse said it appeared that one suspect had a semi-automatic rifle, while the others each had handguns. "They were wearing dark clothing," Pieterse said.

She said according to reports the suspects pointed their firearms at the couple and ordered the husband to open the safe in the house. After the husband complied, the couple were tied up with wire.

No arrests yet
The suspects fled the scene with jewellery, foreign currency, wedding rings, wrist watches, cellphones, a laptop and two revolvers. The value of the missing items was about R823 750, Pieterse added.

She said the suspects escaped through a back door that leads to the river and then disappeared.

No arrests have been made.

Venter said they have combined all their security resources following the incident in an attempt to apprehend the group, to no avail, but that there seemed to be a glimmer of hope. "There is new information that could lead to a positive outcome," Venter said.

More cases
On 6 June suspects forced a window open at a Fairways Avenue home and made off with a watch worth more than R400 000, as well as US dollars and several Euros.

In May, criminals made off with priceless jewels and other valuables during a burglary in Cutty Sark Avenue.

The suspects managed to remove a large safe of about 100kg, with a wheel combination lock, from the home. It contained various pieces of expensive jewellery items and important documents. The homeowners were away on holiday during the incident. The suspects gained entry to the house and broke the safe out of the wall where it was mounted. The safe was later found by authorities with all the contents missing.

Vigilance urged
Venter encouraged residents to become more vigilant about their home security and the general areas around their homes. He added, "Lock your vehicles and make sure you don't leave any valuable items visible in the car. When drawing money late afternoon or during sunset, be observant of who is around you, don't place your card in the slot if you feel uncomfortable with people standing in your private space or who are offering to help you.

"Make sure your alarms and electric fencing are activated when you are not home, and at night, make sure the equipment is in a good working condition. Do a test by pressing your panic button, or activate your alarm to see if your response company calls you," Venter said.

He asked the public to make sure they are safe at all times. "If you see any suspicious vehicle or people who look out of place, contact the PBCPA's call centre on 082 251 8134 and we will dispatch our team immediately to investigate. If you have a very old alarm system, please contact your service provider to do an evaluation on the system to make sure your hardware and software are up to date." One of the scenes after a Plettenberg Bay home got burgled recently. 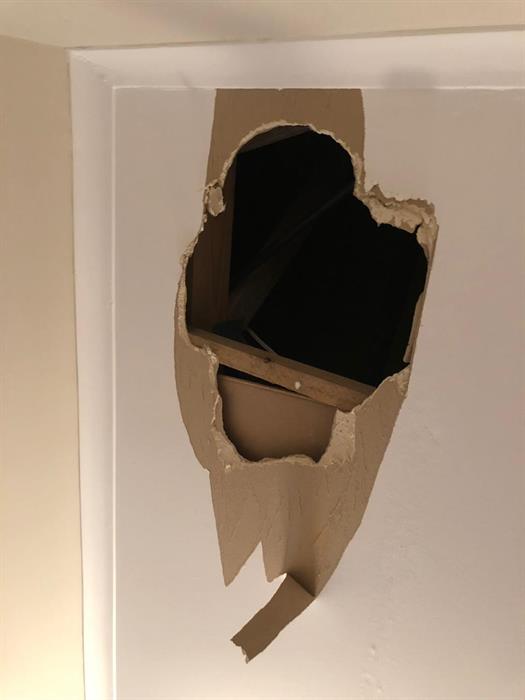 A safe was broken out of this wall and found later by authorities with all its contents missing.