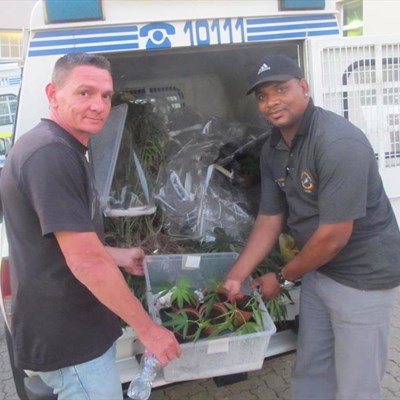 Sergeant Hendrik Jacobs and Constable Charlin Cassel with some of the confiscated dagga plants and magic mushrooms and equipment at the Knysna police station. Photo: Supplied.

On Thursday 23 November, the police swooped first on Bibby's Hoek after a tip-off.

According to police spokesperson Sergeant Chris Spies, a crime prevention operation led to the arrest of a 38-year-old suspect for the cultivation of dagga at Bibby’s Hoek near Rheenendal at about 16:00.

"Information of possible drug-related activities at a house in the rural sector was followed up. Members of the police followed up on the information and searched the premises.

"They found 49 dagga trees outside the house," said Spies.

In addition, the police also found a makeshift laboratory where magic mushrooms were being cultivated inside a room.

They confiscated the equipment and ingredients.

The second incident resulted in the arrest of a 34-year-old suspect for possession of drugs at Parakiet Street in Sedgefield after 210 Mandrax tablets with an estimated street value of R11 000 were found in his possession.

Spies said that the investigation is ongoing.