Convoys of tractors held up traffic in Berlin.

AGRICULTURE NEWS - Thousands of farmers drove their tractors into German cities on Tuesday, in protest at the government's new agricultural policies which they say will hurt their livelihoods and make them scapegoats for climate change.

Long convoys of tractors held up traffic at the main protest sites in Berlin and Bonn, both home to federal government offices, while thousands more honked their horns and blocked roads in cities including Munich, Hanover and Stuttgart.

"Agricultural regulations are becoming ever more strict... and threatening our existence," said 19-year-old Tom Hollstein, who hung a doll dressed as a farmer from a makeshift gallows on the back of his vehicle.

The protesters are furious at a new package of regulations introduced by Chancellor Angela Merkel's government last month, which includes plans to ban the controversial weedkiller glyphosate by 2023 and limits the use of fertiliser to reduce nitrate levels in groundwater.

Glyphosate, sold under the trade name Roundup, has been blamed for plummeting insect populations and according to some studies causes cancer in humans, but supporters of the widely used product insist it is a safe and effective tool to ensure agricultural productivity.

The new restrictions "mean we would have to start working as an organic company, which is very difficult in our region," said Bernard Kalies, a fruit and vegetable farmer near the border with Poland.

One of the demonstrators in Bonn held up a sign that read "Tuesdays for Farmers", DPA news agency reported, in a play on the "Fridays for Future" strikes calling for action against climate change.

Many farmers have said they are fed up with "farmer bashing" by environmental activists, who they say have made agricultural businesses the bogeyman in the climate debate. 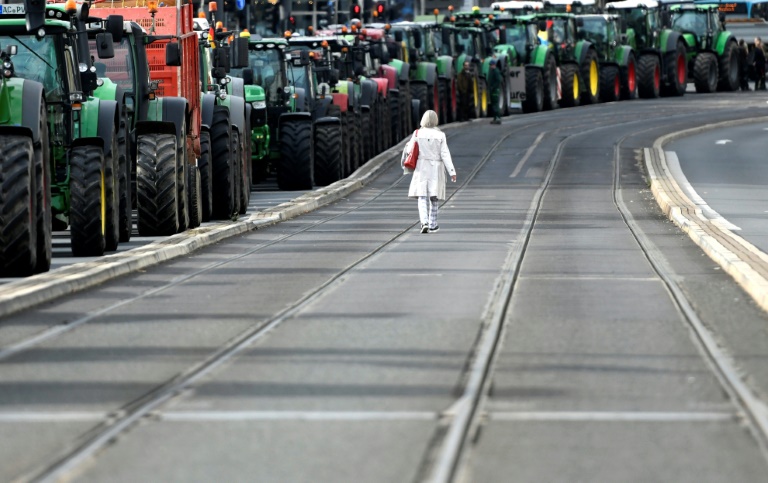 The protesters are furious at new regulations introduced by the German government, which include plans to ban the controversial weedkiller glyphosate by 2023 and limits the use of fertiliser.

"They make the food we eat, they work hard, but they are seen by some as nothing more than 'polluters' or 'animal abusers'. And that is neither right nor fair," she told the Bild daily.

Angry farmers took to the streets in similar protests in France on Tuesday, while Dutch farmers have staged two nationwide demonstrations in recent weeks.