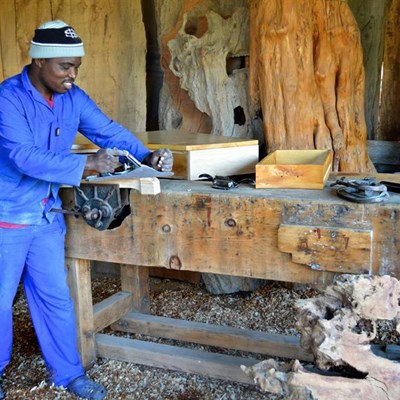 Kaamic Malindi plies his skill at Timber Village, Knysna. Photo: Supplied
KNYSNA NEWS - The theme of the Knysna Timber Festival, "Timber is in our nature", might currently be true. But will it always be so?
Many organisations and individuals are deeply concerned that it might not – because diminishing supplies threaten the future of the timber industry in the Garden Route.
Having suffered the loss of a number of sawmills over the last 20 years – and the consequent loss of more than 7 000 jobs (and even more in the downstream economy) – industry representatives have begun taking proactive steps to reverse the decline.
“Despite rising domestic demand, timber supplies have been dwindling steadily here in the Southern Cape as a direct result of a policy decision – the so-called ‘exit strategy’ – that prevented the replanting of about 21 000 hectares of state plantations.
“And although this decision was partially reversed in 2008, we’re still likely to run out of timber altogether by 2020,” said Theo Stehle, a retired forestry officer who now writes about issues facing the local timber industry.
One sad result of the industry’s decline, said Jock McConnachie, vice-chairperson of the Knysna Timber Initiative, is that Knysna’s “culture of timber” is also threatened.
“There was a time when everything in Knysna revolved around timber: it was the reason the town was established, and it was the main driver of the economy, so it was its biggest employer.
“It attracted skilled and talented people whose knowledge and enthusiasm filtered through society, and it affected everything from sawmilling to furniture making and even literature.” (See, for example, the work of novelist Dalene Matthee.)
But, he said, it isn’t too late to save the situation. “And this is one of the aims of the Knysna Timber Festival.”
Knysna Timber Festival
Sponsored by Woodoc Food for Wood and Saplings Timber Trading, and presented by the Knysna Timber Initiative with the assistance of tourism entity Knysna & Partners and the Knysna municipality, the festival (www.timberfestival.co.za) is designed to showcase the local timber industry, and to provide a marketplace for national and international brands.
It will take place from November 11 to 13, and will include a programme of discussions, talks and demonstrations.
“The Knysna Timber Initiative, the Southern Cape Landowner’s Initiative (SCLI), Knysna & Partners and others will meet formally with government representatives – including the Western Cape’s MEC for economic opportunities Alan Winde – to discuss the future of the industry during the festival. But the programme will also include a series of talks that will appeal to a wider audience,” said festival organiser Picca de Bruin.
Dalena Wolmarans, for example, who runs the Stander family’s timber transport business, said that she will talk about the different species of trees grown and harvested in the Garden Route.
“The tree species and supporting industry of our region are intertwined. The one cannot exist without the other. If one shackle gets disturbed it puts a huge burden on other parts of the chain,” she said.
Festival arrangements
De Bruin said the festival has become a regional event for hobbyists, foresters, conservationists, woodworkers, wood millers, timber merchants, and anyone involved in the timber industry.
A limited number of exhibition spaces are still available for local and national brands that want to showcase their timber-related products or services.
Attractions at the festival grounds will include food stalls, a beer garden, and a kids' zone.
“This is truly a festival for everyone,” said Knysna & Partners chief executive Greg Vogt. "And we hope that the entire community will support it with the same enthusiasm that timber has supported us all over the centuries here in Knysna.”
'We bring you the latest Knysna, Garden Route news'