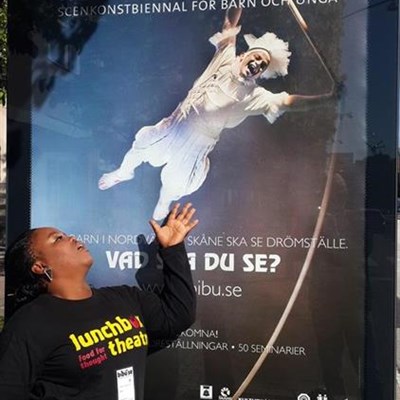 Their journey was made possible by Assitej, an NPO focused on the creation of quality theatre for children and youth, through their From Idea to Action grant which serves to mobilise Southern African theatre-makers around the issues of children's rights and to develop and empower female directors to make work for young audiences.

Palmer said it was indeed a serendipitous moment when they realised that the show they had been working on conformed to the requirements enabling them to attend Bibu.se. "It all fell into place at exactly the right time," he said.

The 27-year-old Valela was born and raised in Plettenberg Bay where she attended Phakamisani Primary School and Murray High School. This was her first experience of international travel. "The shows were amazing. Sweden was amazing. I learned a lot," said Valela.

She commented on the standard of the acting she had been exposed to which in her experience proved to be higher than the South African standard. She said she had particularly enjoyed watching the actor's interactions with the audiences.
After attending the workshop with international and Southern African representatives, Palmer noted that there were different manifestations of the same issues in different countries, which each had their own approach to dealing with these common issues experienced by children.

"My passion for really focussing on theatre for children and young people has been re-ignited," said Palmer, "With organisations like Assitej pulling together over 90 countries around the world, we have some awesome support networks to take us to the next level," he concluded.

Valela started attending Drama classes with her brother Mncedisi Ncedani in 2001. In 2008 she joined Lunchbox Theatre as an actor in the show Khoko's Suitcase. Since then Valela has grown with Lunchbox Theatre. She facilitates weekly dance classes and is being groomed to fulfill the role of director under the guidance of Palmer.

Valela will debut as assistant director on Lunchbox Theatre's latest production, Ilifa, which has been accepted into the Main Programme of the 2014 National Arts Festival in Grahamstown. Ilifa is a multi-disciplinary performance piece inspired by the rights of children and the need for them be heard in all arenas of society.

Stuart Palmer, Amanda Valela, Mncedisi Ncedani, Nomzamo Maga, Claire Oosthuizen, Siyabulela Matyhila, Martin Wolfaardt and Nkosinathi Xipula will travel to Grahamstown for their performances on the Drostdy Lawns on July 10, 11 and 12.
Ilifa is supported by the National Arts Festival and the National Lottery Distribution Trust Fund (NLDTF). Twenty shows will be performed countrywide following the National Arts Festival performances. Lunchbox Theatre and Ilifa will also travel to the Harare International Festival of the Arts (HIFA) in Zimbabwe in 2015.