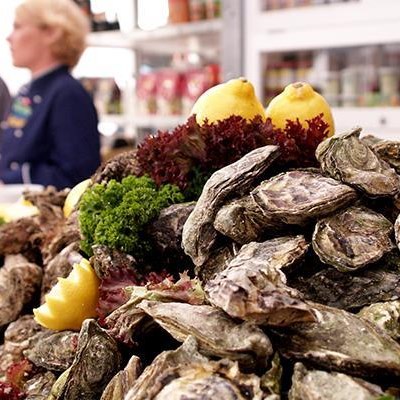 Photo from last year's Oyster Festival. Photo: Supplied.
KNYSNA NEWS - The last meeting of the joint organising committee for the Pick n Pay Knysna Oyster Festival was held at the Log Inn, Gray Street on Thursday, May 14.
Owing to family commitments the festival manager could not be present and the meeting was led by Steyn Momberg of World Sport, Pick n Pay’s promotional company, assisted by three of his staff and Kegan Borchards of Knysna Tourism.
Steyn opened by saying with only weeks to go before the festival (on July 3 to 12), it was very encouraging to see the largest attendance at any meeting thus far this year.
Key issues covered were the outstanding application forms from event managers, and the branding proposal, all of which are due by the end of May. Captain Dewalt Kitching, for the SAPS, reassured everyone that plans were well established to ensure safety and security, and he reminded all event organisers to hurry up with their applications for special liquor licences as they took time to process.
The main festival branding is for Pick n Pay, Tobasco, Van Loveren Wines, Energi 4, Windhoek Lager, Cape Times, Weekend Argus and Novus Holdings. Steyn assured the public that there would be lots of entertainment over the two weekends of the festival with many big entertainers appearing.
Over 30 media instances are involved in publicity, as well as social media in the form of Twitter, Facebook and Instagram. KFM will have Air DJs Kelly Pierce and Candice Botha carry news of the festival.
The festival office has a marketing plan showing the activation dates of the promotional activities, while a six-page magazine in Z-folder format will contain the festival programme.
Event organisers reported on the status of their plans. Magnetic South reported that the Salomon Trail Run would be held in the morning and midday, no longer at night. The Knysna Marathon Club reported that the new event, Houtkapper Trail Run, had 250 entrants so far. The half-marathon is already sold out and 50% of the full marathon entries have been sold. The Momentum Cape Argus Knysna Rotary Cycle Tour organisers reported that there would be a Rotary Children’s Tour and a Family Dam Ride at Simola on the first Sunday of the festival.
Applications for all activities will close on June 19.
The Protea Hotel reported that this year will feature the last Waitron Races, and that a different event will be considered for 2016.
Picca de Bruin said that the activities for the disabled were well in hand. She also reported that everything was going according to plan for the Flavours of Knysna event, which incorporates the oyster cooking competition, and the Oyster Shucking with Marc Lottering.
A newcomer to the festival, Caroline Watson, announced the participation of Lemonade Day stands which promote entrepreneurial activity for youngster supplying lemonade. Mad about Art will also co-operate with them.
A Chocolate and Oyster Festival will be held at Villa Castollini on the Brenton Road, with a raffle in aid of Hospice and the Knysna Education Trust.
James McCarthy of Eden District Health Department announced that everything was cleared on the food preparation side of things, and he would inform everyone of anything they should know. The libraries announced that they would all be participating in the Young Oyster Festival, and Woodmill Lane will hold the pavement art event again.
The Knysna Wine Festival organisers have plans in place to counter load-shedding. They are offering tickets online at R150 with an early bird special of R100 per ticket until June 15.
Inflatable Fun will be on the high school fields again with various games for youngsters, This year there will also be Knockout Games and two Colour Parties for the teenagers and young adults, on both Fridays.
Zandile Meneses has announced that she will be the venue manager for the central venue marquee tent at the festival grounds and can be reached on 082 851 3622.
Steven Eriksen said that the Knysna Sea Cadets will assist at the cycle tour, and will be 'in camp' at the unit base in town from July 6 to 12. They will assist the SA Navy in berthing at Thesen's Jetty, at the Flavours of Knysna event, the Main Street parade and the Navy Band in Concert on the Sunday. Their food for breakfast and lunch will be provided by Pick n Pay.
The festival organisers have asked all event managers to nominate a charity for their support and Eriksen asks that the Sea Cadets be remembered.
The Navy is coming to the Festival. An acceptance of the invitation to attend was received from the office of the chief of the Navy, Vice-Admiral M Hlongwane, and he will be accompanied by two further admirals, various senior officers and the crews of two ships expected to enter The Heads on Tuesday July 7.
The Navy will mount a parade in the Main Road at 11:00 on Friday, July 10, and a concert at the Quays on Sunday 12.
Click here for a previous news flash.
'We bring you the latest Knysna, Garden Route news'