Strooh was his composed self when the pair started the final 18 holes.

The Krugersdorp golfer fired rounds of 70, 73, 72 and 70 in the Stroke Play Qualifier to make the field for the Match Play tournament.

He cruised through the knock-out stages, dismissed Behn Heyns from MIddelberg 2 & 1 in round two, Dean Wilken from Silver Lakes 2-up in round two Simola’s Damian Osner 4 & 2 to to set up a mouth-watering semi-final with reigning SA Amateur champion Christiaan Maas.

On paper Maas seemed a shoo-in for the double.

He had been simply superior in the Stroke Play stage, setting a new tournament record on 23 under en route to an eight-shot victory. The 17-year-old Maas not defeated England Golf Squad player Jack Dyer 3 & 2 for the SA Amateur title, but had won 13 times in the last eight months.

Strooh proved a tough nut to crack, though. The pair traded the lead in ‘n tightly-contested battle that went into overtime and it was Strooh who came up trumps, beating Maas with a birdie at the 22nd hole.

“Christiaan is a great competitor, so I knew going in that it was going to be a really tough match,” said Strooh. “I’m not a very technical guy; I am more of a feel player. I just play the course as I find it. So I kept it simple and just played my own game. It was intense, though, I was pretty relieved to get it done and get to the final.”

GolfRSA National Squad member Bennett, coming off a top 15 finish in the 72-hole qualifier, knocked out Stefan Jacobs from Randpark 5 & 3 and Fancourt’s Morris Schiefner 4 & 3 to reach the quarter-finals.

He made the semis with a 2-up win over Joshua Koekemoer from Silver Lakes and beat Umdoni Park’s Jack Cubitt 1-up to make the final.

The 15-year-old was the one to apply the early pressure and went 3-up in the first five holes as Strooh made a shaky start with back-to-back bogeys on the third and fourth holes. But Strooh dug in his heels and steadily trimmed his opponent’s lead until he squared the match on the par-4 14th.

“I was left in the trees and all I could do was punch out back to the fairway,” said Strooh. “Then I hit my third stiff and made the putt for birdie. I also birdied 16 and held the lead for the first time, but I misread the par putt on 17 and we were back to all-square.” 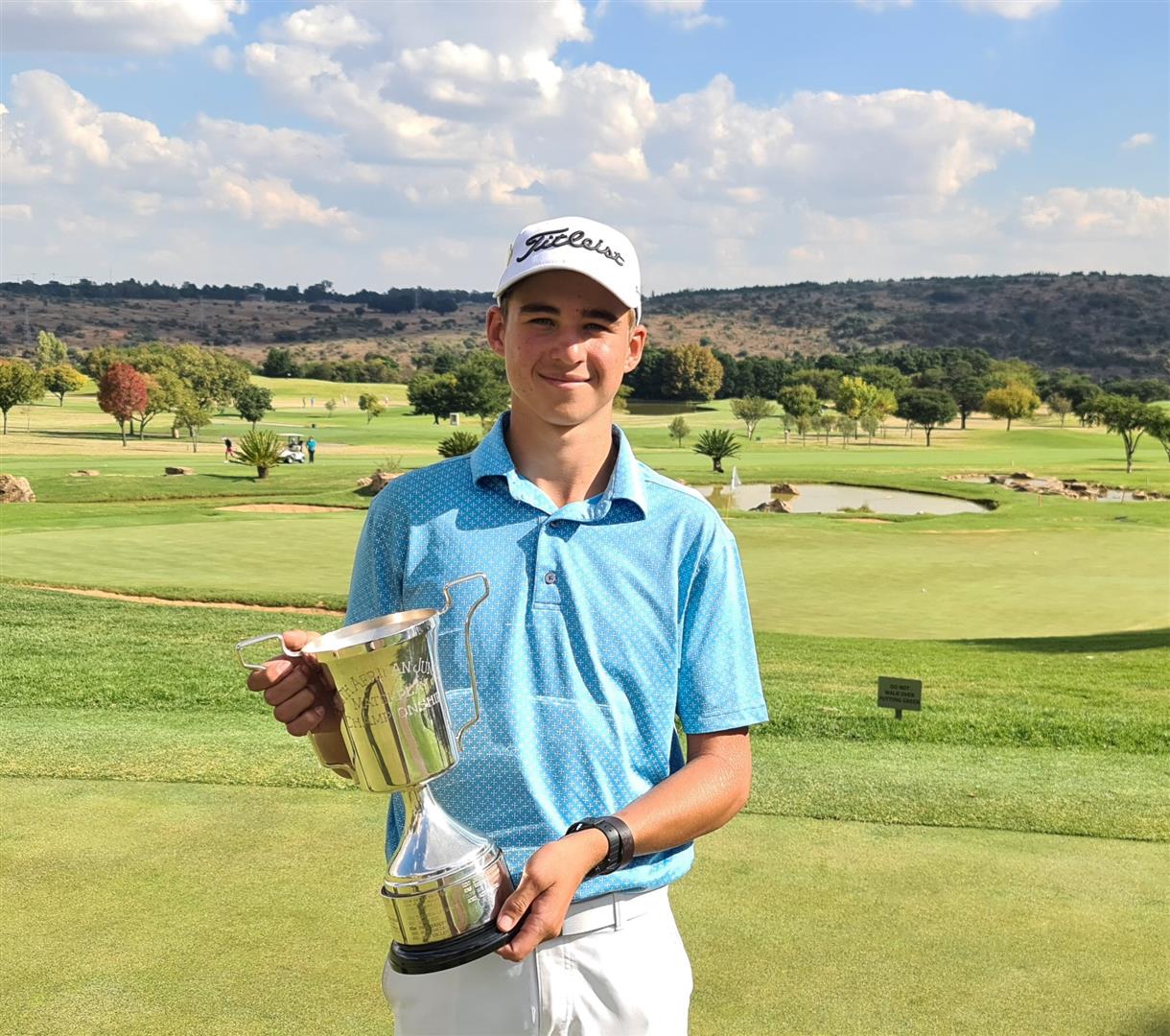 Strooh was his composed self when the pair started the final 18 holes.

“There was just a lot of nerves there at the start and as we went along, I began to relax and play my own game,” said the 17-year-old, who gained the lead, lost it and regained it with a birdie-bogey- birdie combination from the 25th hole.

“The birdie on the ninth was really the turning point. I had left myself in the rough off the tee and I managed to get on the green for two and holed an 8m putt for birdie.”

Strooh won the 28th hole with a par and birdied the next to 3-up.

“I was dormie 3, but then I lost 16 to a birdie after a snap-hooked my tee shot. On 17, I drove it in the water and Daniel was on the green for two, so I conceded. I still had a slender advantage going to the 18th tee.”

Strooh hit the green in two, but Bennett found the bunker on the par five closing hole.

“I had about 20 feet left to the hole, and after Daniel splashed out to about six feet, I knocked my putt stiff and we called it a day. This is without a doubt the biggest achievement of my career.

“I share this with my mom and dad, especially my dad. He is not exactly my coach, but he helps me with my game and on the mental side. This was a demanding week and I’m really over the moon with this win. I was the runner-up twice in the Nomads SA Boys U15 in 2017 and 2019 and I was gutted that we couldn’t play last year. I never doubted myself this week and I am really proud of the way I handled myself.

“I also enjoyed playing against Daniel. He is only 15 and already a tough competitor. I look forward to competing against him again in the future.”

Strooh will have to cut the celebrations short to make his Sunday morning practice round ahead of the inaugural Nedbank Junior Challenge, which tees off on Monday. 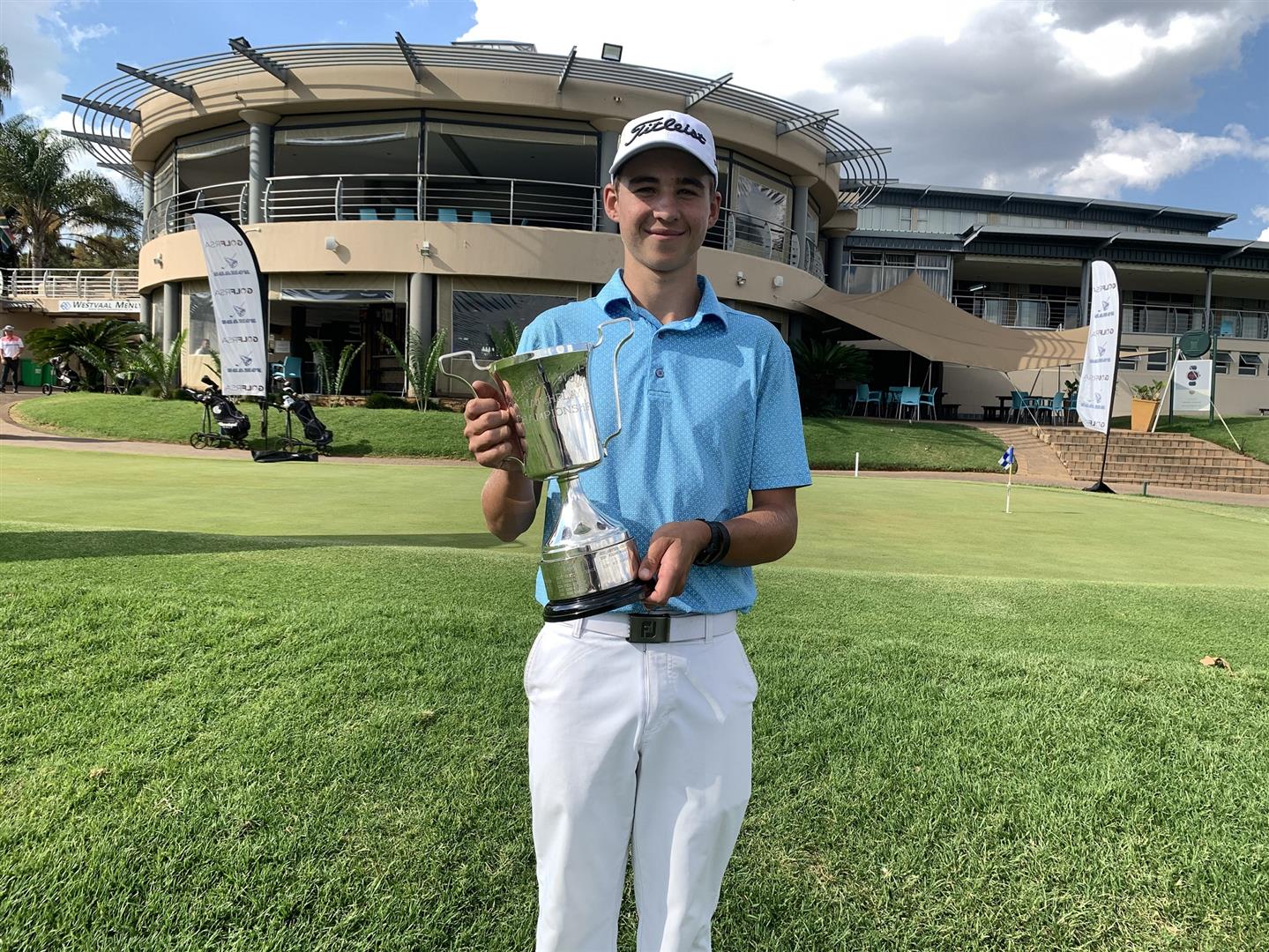 “I’ve played the Gary Player twice before in the Sun City U13 and U15 Challenge, but they will probably set it up a lot tougher for us. I really can’t wait for this one. It’s going to be epic. Hopefully I’ll have another great week at Sun City.”