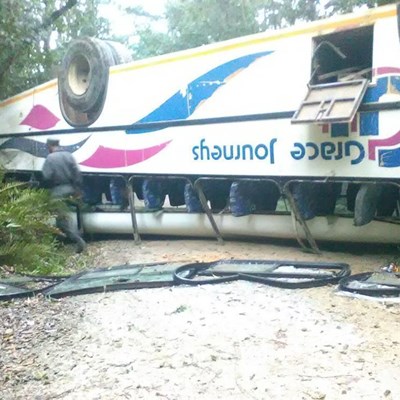 The bus that overturned at Diepwalle, Knysna, whilst picking learners up for school. Photo: Supplied
KNYSNA NEWS - Contrary to initial information received by the Knysna-Plett Herald (KPH), the four learners who were on the school bus that overturned in Diepwalle, Knysna on the morning of Friday, February 3, were not only primary school learners.
The school bus overturned before 08:00 that morning on its way to collect more school children.
Communications manager for SANParks Garden Route, Nandi Mgwadlamba, first told the KPH that the learners were from Hornlee Primary and Knysna Primary school. It has since come to light that the four learners were headed to Chris Nissen Primary School and Knysna Secondary School.
“We can confirm the learners were from an MTO/Cape Pine forestry village heading to our SANParks village in Diepwalle when the accident occurred,” Mgwadlamba said on Tuesday (February 7).
According to Mgwadlamba two out of the four learners who were injured were hospitalized at the Knysna Hospital, while the other two were examined and treated, but not hospitalized.
“One of the injured learners is one of our employee’s granddaughter, Wilfred Oraai. We have also heard unconfirmed reports that there were nine other people on the bus at that time, possibly getting a lift to town, but we cannot verify the report,” Mgwadlamba said.
The names, exact ages, and condition of the two children that were hospitalized could not be confirmed by the time of going to press.
Park manager of the Garden Route National Park, Paddy Gordon, said SANParks will partner with MTO/Cape Pine and SAPS to investigate the matter as the safety of children is a priority.
Click here for previous articles: