Environmentalist Patterson does it again 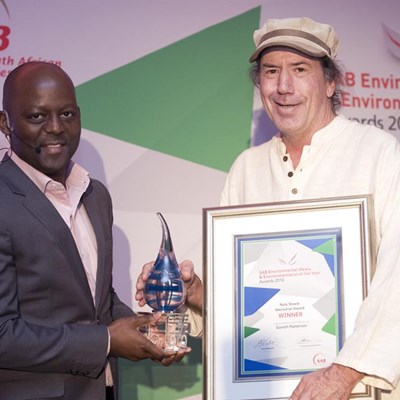 SAB executive director corporate affairs and transformation Bongumusa Makhathini hands renowned Knysna environmentalist Gareth Patterson his award. Photo: Supplied
KNYSNA NEWS - Known for his research on the endangered Knysna elephants, wildlife expert and author Gareth Patterson has added yet another award to his list of environmental accolades recently.
Patterson was announced as one of the winners of the annual SAB Environmental Media and Environmentalist of the Year Awards at Summer Place, in Sandton on October 18.
Patterson won the Nick Steele Memorial Award for the environmentalist of the year. Other winners include Susan Scott of Africa Geographic, who won the written media award, Kim Ludbrook of European Pressphoto Agency, who won the photography award, Julie Laurenz of 50/50, who won the video media award and Monique Mortlock of Eyewitness News, who won the audio media award.
“It was a real honour to receive this award. My study and rediscovery of the Knysna elephants and my book, The Secret Elephants, is a major part of my work for African wildlife and therefore in a sense is a part of the award. I am proud of that. I have lived here on the edge of the Knysna forest since 2001,” said Patterson this week.
He added that nine years ago he had been one of judges for the SAB Environmental Awards. “So this time, the shoe was on the other foot.”
Patterson is known internationally for his efforts to protect the lions and elephants of Africa, and his wildlife work has featured widely in the media over the years.
He also investigated, and contributed to exposing, South Africa’s canned lion hunting industry, and he rediscovered the Knysna elephants, previously thought to be a "functionally extinct" population.
Last year, Patterson said, he started his Secret Elephants Forest Experience again. It entails taking small groups of people into the forests and mountain fynbos to explore the “magical world of the Knysna elephants”.
“It is not a search for the elephants. They must be left alone and undisturbed. The Secret Elephants Forest Experience is a verbal and visual interpretation of my book. My guests love the experience.”
The awards aim to recognise, among others, South African journalists who report on, and create awareness of, environmental issues across print, electronic and digital media.
ARTICLE: YOLANDé STANDER, KNYSNA-PLETT HERALD CORRESPONDENT
'We bring you the latest Knysna, Garden Route news'
Posted on: 12:03 Fri, 28 October 2016
Your Comments