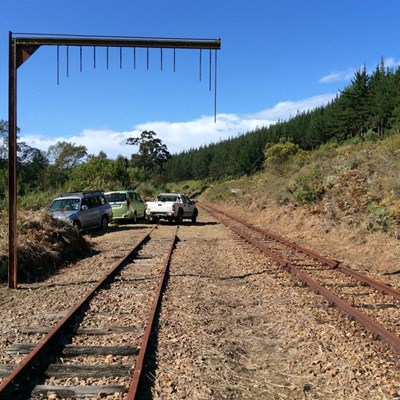 Keyters Nek station after clearing.
KNYSNA NEWS - With teams of people clearing the railway line between the Knysna station and Keytersnek (near the Rheenendal turnoff on the N2), it’s obvious that something’s happening on our historic track.
In fact, they’re getting it ready to run trains once more: the Classic Rail has been awarded a 20-year concession on the George-Knysna line. Transnet Freight Rail formally granted the company beneficial occupation of the line from February 16, and access for line repairs in June. Legal agreements between the parties are now in circulation for final signature.
Classic Rail’s Alan McVitty said that a team of engineers have been in Knysna this week to inspect the bridges over the Knysna estuary.
“The line between Knysna and Sedgefield is still largely intact (it was last used 10 years ago), but sections of the line between Sedgefield and George will require major repairs,” he said.
For this reason, Classic Rail is planning to bring a diesel and steam locomotive and a number of carriages by road from George, so that operations can begin as soon as possible.
“We’re planning to convert some carriages that we bought on auction into dining cars, and then to run our first product, the Knysna Dinner Train, by about the middle of next year.
“We also plan to build a new steam train depot at the Sedgefield station and operate the Choo-Tjoe between Knysna and Sedgefield as soon as possible.”
McVitty said the repair of the line between Sedgefield and George is now being considered a future phase.
“The provincial government indicated that it would entertain the possibility of contributing grant funding, and requested the Cape Higher Education Consortium to make an independent study of the economic benefit of bringing the Choo-Tjoe back to the Garden Route,” he said.
“The findings, which were presented in April this year, concluded that the outlay would return an equal economic spin-off in less than one year – if tourists stayed in the region one night longer in order to experience the Outeniqua Choo-Tjoe.
“But the caveat, of course, was that the Outeniqua Choo-Tjoe must be operational, which is what we’re aiming to achieve.”
Knysna & Partners chief executive Greg Vogt said that the return of the Choo-Tjoe will be a dream realised for the region.
“The strength of our tourism offering comes from our attractions and adventures, and we look forward to working with Classic Rail to integrate the train with other attractions, and thus grow our local economy.”
Staff working on clearing the line above the white bridge.
After clearing the track.
ARTICLE: MARTIN HATCHUEL
'We bring you the latest Knysna, Garden Route news'
Posted on: 08:00 Thu, 11 August 2016
Your Comments