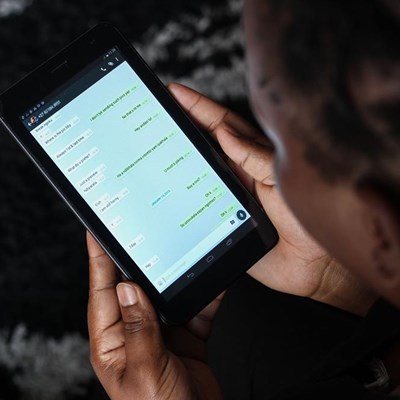 The saucy WhatsApp messages believed to be between Pumela Mnqaba and Bitou mayor Memory Booysen are shown by Mnqaba on her Samsung tablet. Photo: Ewald Stander
PLETTENBERG BAY NEWS - The woman at the centre of a sexting scandal involving Bitou mayor Memory Booysen was shocked when their WhatsApp exchange made headlines recently.
"I still don't know who is responsible for this. I never asked for this to happen," Pumela Mnqaba said during an emotional interview.
A series of steamy WhatsApp messages between what appears to be Booysen and Mnqaba were widely circulated among journalists and politicians more than two weeks ago.
An email, sent under the name Maxwell Jamangile, includes a transcript of these messages.
The transcript shows that a contact labelled "Pumi" allegedly first made contact with Booysen in January this year and the exchange lasted for about a month, involving discussions relating to a meeting over a job, which later turned into messages of a sexual nature.
The messages, predominantly in isiXhosa, include a request by what seems to be Booysen for photographs of her "private parts".
Booysen has since denied sending the messages and said that his phone had been in for repairs when the messages were sent.
Booysen labelled it a "smear campaign" against him and the DA ahead of the August local government elections.
He added the only Pumi he knew was a blood relative and he had not seen her in more than a year.
Mnqaba said that Booysen "was lying" and that the saga had severely affected her life.
"Firstly, I never ran to the media with this, but what is written in the newspapers is the truth," Mnqaba said.
She said the reason why she decided to tell her story, was to set the record straight.
She explained that she had shown the messages to a family member, who advised her to contact a lawyer. Following this several people allegedly saw the messages. "So I really don't know who distributed them."
She added that everywhere she went people were calling her a liar.
"I am not a liar," Mnqaba said while pointing to the entire exchange on her Samsung tablet. The number the messages were sent from is that of Booysen.
"He says his phone was in for repairs during the time, but that is a lie. In between messages he even phoned me to ask me about the photographs he requested, before continuing to plead for them via WhatsApp. So how can the phone have been in for repairs?"
She said the sexual nature of the conversation sickened her as Booysen was part of her clan, and according to customs they could not have a sexual relationship.
"I'm also not going to sell my body for a job. I'd rather live in poverty."
She added that Booysen's claim that he had not seen her in more than a year was also a lie. "In January, the week before the messages started, I was standing near the taxi rank in Plett. The mayor drove past me in his big white car [Ford SUV] and stopped in the middle of the road and called me to the window."
She said he told her to make an appointment to see him in his office over a job she applied for in the municipal library as "he did not want his 'sister' at home [unemployed] while he was around".
"I didn't have his number anymore and he gave it to me then and there. And there were people around who saw we were talking."
She added that after several unsuccessful attempts at making the appointment she contacted him via WhatsApp.
"The next thing I know I get messages saying that my story is in the newspaper. I was shocked."
She added that since the incident she had been living in fear. "People are angry at me and I'm afraid I might be harmed," the mother of two said.
She said mentally the saga had taken its toll. "I'm trying to sleep during the day and at night sit up to protect my children. I've been trying to stay in my house most of the time and only ventured out to the pharmacy, as I was completely overwhelmed and asked for tablets to help me remain calm."
She added she did not know why this had been made a political issue. "People are saying it is an ANC smear campaign, but what they don't know is that I worked day and night to help Booysen [DA mayor] into power."
Mnqaba said she just wanted everyone to know that she did not leak the messages and that she was "not a liar".
Booysen however remains adamant that he did not send the messages.
Read a previous article: Bitou mayor denies 'sexting' allegations
ARTICLE: YOLANDé STANDER, KNYSNA-PLETT HERALD CORRESPONDENT
'We bring you the latest Plettenberg Bay, Garden Route news'
Posted on: 08:00 Thu, 16 June 2016
Your Comments