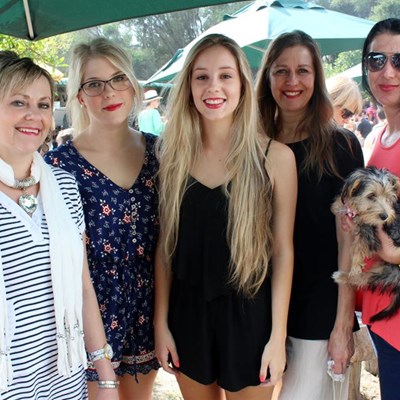 Seen at the Wild Oats Farmer's Community Market sporting their red lips in support of the Red my Lips campaign are (from left) Sam Trietsch, Babette Abrahams, Gabriella Claassens, Karen van der Walt, Belinda Hobson and the Yorky, Brie. Photo: Fran Kirsten.
SEDGEFIELD NEWS - Red My Lips is a global awareness campaign that mobilises women globally to wear red lipstick for the month of April to demonstrate solidarity and support for survivors of sexual assault.
Although Red My Lips is an international nonprofit organisation based in the United States of America, its annual global awareness campaign has reached Sedgefield where some women were spotted sporting red lips.
"When I paint my lips red every morning I give thanks that I have not been a victim of sexual abuse. My red lips have also resulted in many people ask me why I am wearing such red lipstick during the day and I can then tell them about the Red My Lips campaign," said Sedgefield resident, Belinda Hobson.
According to the Red My Lips website: "Red My Lips is designed to raise visibility and awareness about the realities and prevalence of sexual violence, while combating rape myths and victim-blaming."
The website further explains that women often convince themselves that "rape only happens to 'those girls' who 'weren't careful', 'gave mixed signals' or 'put themselves in a bad situation'. This tendency to deny, shame, or blame survivors who come forward only serves to convince other survivors that they are wise to keep quiet, giving those who perpetrate these crimes free reign to continue doing so without consequence.
"Additionally, we frequently misunderstand rape and sexual assault as something provoked by uncontrollable sexual attraction or desire - instead of what it is: an act of domination, entitlement and violence. This mentality was echoed in the infamous statement made by a Toronto Police officer in 2011, when he said, 'Women should avoid dressing like sluts in order not to be victimised,' which triggered worldwide protests known as Slutwalks."
Wearing red lipstick in April allows supporters to speak out against these damaging myths and victim-blaming attitudes. It allows women to refuse to become invisible and shows their intent of refusing to be silent.
Red My Lips was founded by Danielle Tansino after she was raped by a childhood friend of her housemate in April, 2011. After filing a police report, and following a traumatic experience with the court system, she was told by a female district attorney that they would not prosecute because, "Jurors don't like girls that drink."
That was the defining moment for Tansino as she realised that it was not the system that fails victims of sexual violence but rather the people who makes up that system. "What was almost more shocking than this realisation was the response from friends and family who suggested that the attack was a mere misunderstanding or who attempted to frame it as a natural consequence of 'not being careful enough'. Many others refused to hear or talk about it at all," she was reported as saying.
ARTICLE: FRAN KIRSTEN
'We bring you the latest Sedgefield, Garden Route news'
Posted on: 10:00 Fri, 24 April 2015
Your Comments