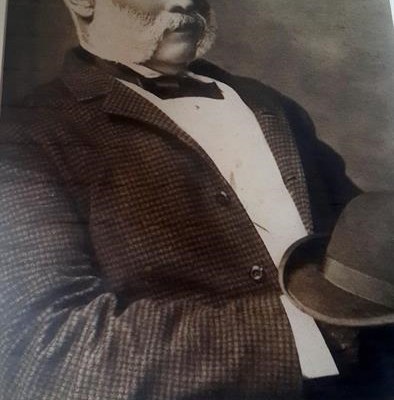 George Rex, founder of Knysna never allowed anyone to take pictures or make drawings of him or any members of his family. This picture of one of his sons, George Rex Junior, was taken after his father's death.

KNYSNA NEWS - New DNA test results of the remains of one of England’s most well-known monarchs; King Richard III shows that the founder of Knysna, George Rex (1765 – 1839), may not, as some people believe, be of royal descent.

Following an article titled, New DNA tests raise questions over British Queen’s legitimacy, Craig Rex told an internet news page, sputniknews.com published on December 5, that the latest DNA analysis of another well-known monarch King Richard III has led to fresh questions over the legitimacy of the present British Royal family, the House of Windsor. “If they, the Royal heirs, are prepared to offer their DNA then ‘finality’ would be in order,” Rex told the Sputnik. Rex claims to be a 7th generation descendant of King George III and a descendant of George Rex.

“Historians remain split on the issue, but some researchers believe George Rex of Knysna in South Africa, was the legitimate first-born son of King George III of England. Now new speculation of a mismatch in the DNA of Richard III has reignited questions over the rightful inheritors of the throne of England,” the Sputnik reported.

According to Rex, “my family believe that there were strong ties between my ancestor George Rex of Knysna and the British Royal family at the time,” adding that “There are contemporaneous documents, showing the Royal Family went hunting on the Rex estate during visits to South Africa. Why was there this strong connection when George Rex was the supposed son of a distiller?”

Melanie Groenewald, the curator at Knysna’s Millwood museum who is very knowledgeable when it comes to the history of George Rex, found Rex’s comment very amusing. “The Royal family wanted to hunt in this area. In those days there were not many people living here, so George Rex’s sons organised the hunt. And there was only one hunt.” She added that George Rex was not “supposed” but was in fact the son of a distiller.

Groenewald said there has been no proof that George Rex was the son of King George III, but she finds that a lot of people, including some members of the Rex family, prefer to believe the myth. As legend goes, George Rex was the son of King George III and Hannah Lightfoot, a Quaker whose father was a shoemaker.
Because they were an embarrassment for the Royal family, the couple was banished to the Cape, granted large portions of land and was forbidden to marry. Groenewald said George Rex himself, never denied or admitted this story. Groenewald said there are many questions around the founder that has never been answered. For instance, why he never wanted to have pictures or paintings made of himself or his children? And, why he never formally got married? The claim that the Rex family were royalty was thoroughly disproved by Patricia Storrar in her book George Rex: Death of a Legend in which she stated that genetic testing in 2004 reported that there was “a lack of royal blood.”
'We bring you the latest Knysna, Garden Route news'
Posted on: 13:40 Thu, 11 December 2014
Your Comments