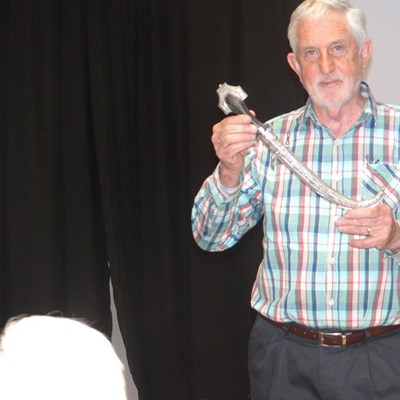 Retired Rear Admiral Theo Honiball gave a fascinating report on the South African-Moroccan connection based on his experiences. He is pictured holding a ceremonial dagger known as a koumiya, which was presented to him by a Moroccan general. Photo: Steve Eriksen
KNYSNA NEWS - Retired Rear Admiral Theo Honiball, a resident of Knysna, presented a fascinating insight into South Africa’s relations with the rulers of Morocco in the latter part of the 20th Century, on Monday, October 3.
During this time, Honiball, retired from the navy and working with SA arms manufacturer Denel, was invited to join the South African party going to meet the king of Morocco and his generals. It was all top secret, and the group arrived in Casablanca very hush-hush, accommodated in a hotel. After a visit to a nightclub, the next day they met a general who was to arrange an audience with the king.
The general announced they must sit and wait for a call. Arriving at 10:00 they waited and went back to the accommodation. This went on for three days. Eventually, somewhat fed-up, the group went to book a flight back to South Africa by Royal Air Maroc.
Their hosts announced they would be picked up the next morning to be taken to the airport. Duly picked up and in the vehicle they were told they were at last to meet the general they had come to see. The South Africans presented him with a magnificent hunting rifle, and Honiball was in turn presented with a magnificent dagger in a beaten silver sheath.
This was a koumiya, a symbol of manhood worn over the right shoulder on a strap, hidden under the djellaba (loose outer robe). After the meeting they drove on to their next stop in a vehicle that seemed not to have a speedometer, at high speed. As the vehicle slowed the speedometer needle appeared – it had gone right off the clock!
The following morning they were informed that the king would receive former prime minister PW Botha. Times and places of meeting were hidden by elaborate means; the French Secret Service were monitoring their visit. PW was to land at Orly Airport in Paris, the French Secret Service would move him to Le Bourget Airport by road, and he would fly to Morocco.
The French president was concerned that the visit may become public knowledge, and so SAA painted a Boeing white with a green tailplane. They flew from Lisbon to Casablanca, with the air crew wearing civilian clothing. The South Africans made a couple of trips to make the arrangements.
After all this PW, Pik Botha and General van der Westhuizen arrived, and were taken into the Atlas Mountains near Fez, arriving at 03:00 to a magnificent banquet at a residence of the king. At 09:00 they left to go to the king's palace at Rabat to meet King Hassan.
Honiball, who had worked for two years in France on the Daphné submarine project, was appointed interpreter between the king and PW. The king was actually fluent in English, but Honiball spoke to PW in Afrikaans, then French to the king, who responded in French. In this way the king knew what was coming in every exchange.
The king wanted to know what the South Africans wanted, and was astonished to hear all they wanted was to learn how the Moroccans managed their water for agriculture. They then offered to sell him Ratel and Eland armoured vehicles from Denel. The king and PW got on very well, and PW gave the king a fabulous hunting rifle and a ceremonial sword for the crown prince – then offered to make a second rifle for the king's general.
South Africans fighting Swapo and the Moroccans fighting the Polisario Front found a lot in common. Sixty Ratels and 60 Elands were delivered to Morocco in a quick and easy sale. The South Africans had to remove all evidence of the SA connection, and found the Moroccan soldiers very disinterested and slow to assist.
One youngster appeared with an old tatty magazine, calling out that they were South Africans. The Moroccans' attitude changed immediately: they had thought the South Africans were Dutch – having been hearing Afrikaans – who knew nothing about desert warfare. At once they were helpful and friendly.
Major Fred Rindle, with an armoured column of Moroccans, was informed they would proceed through a narrow valley. He refused, saying he feared an ambush. He was right. The column was trapped and 30 vehicles destroyed. In another battle, a Moroccan platoon ran from the conflict – General Dlimi called a parade in the desert incorporating the platoon, marched over and executed the lieutenant in command in front of his platoon. The Moroccans were friendly and hospitable, but had a hard and savage backbone.
As time went on Moroccan soldiers came to South Africa for training in the Northern Cape. Guns given them by the Americans which they could not use effectively, became useful with South African training. A very good relationship between South Africa and Morocco continued.
'We bring you the latest Knysna, Garden Route news'
Posted on: 08:13 Thu, 06 October 2016
Your Comments