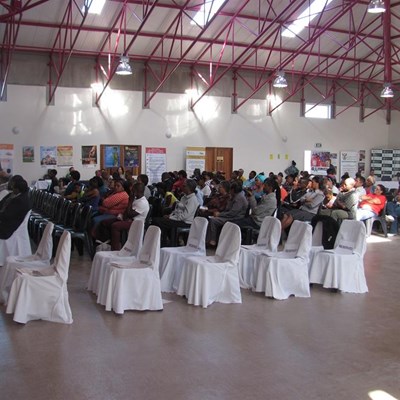 As such, New Horizon has been recognised as one of the key communities in the Western Cape to engage women and children and empower them through education about their rights and the workings of the Criminal and Civil Justice system.

Those who attended the Imbizo were alerted as to their rights and how to access them free of charge from the State. The department indicated its aim that access to such information will help protect vulnerable groups, and break the silence that surrounds gender-based violence.

Community members were given the opportunity to pose questions to a panel of experts representing the National Prosecuting Authority, the Master's office, Correctional Services, SAPS, the Family Advocate, Home Affairs and Legal Aid South Africa.

Concerns relating to care and contact of minor children, sentencing of offenders, the relationship between the community and the police, and the general state of crime in the area were raised by the community.

Colonel Nolan Micheals, Plettenberg Bay Police station commander, encouraged the community to make use of SAPS' frontline staff and familiarise themselves with the complaints processes in order to ensure more effective service delivery.

'We bring you the latest Knysna | Garden Route news'